There is no comparable to Babar Azam in the world currently.

Across formats, red ball or white ball, home soil or foreign, Babar is the only batsman in the world who is consistently dominating all formats of the game.

The way he batted yesterday in Pakistan’s first innings of the first test against Sri Lanka is what legends are made of.

Holding together Pakistan’s batting, farming the strike while batting with the tail, and absorbing all the pressure there was out there showed what a great test batsman he is.

Anyone with a weaker mind would have started to hit out while batting with the tail.

He shepherded the tail like a true master and knocked his 7th test century without playing a single false stroke.

That was a really special innings.

There aren’t many batsmen in this world who have masterfully farmed the strike while batting with the tail for as long as Babar did. Greats like Steve Waugh and Inzamam Ul Haq come to mind when thinking of holding batting line ups together while batting with tailenders; not many others.

Babar’s innings was right up there with the best test knocks.

In the past three years, from July 2019 to July 2022, Babar has been the best in the world when it comes to Test Cricket. While he has the 6th most runs in test cricket in this period, he has the highest average in this format. If Pakistan got to play as many Tests as England, India, or Australia, you know where he would be in this list.

Nevertheless, that average of 62 is right up there and unmatched at the moment, and whether there is a Fab 4 or a Fab 5 or a Fab anything, Babar is right at the top of that Fab list! 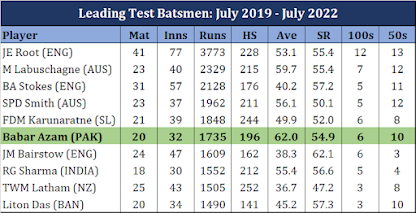 There is no doubt about Babar being the best ODI batsman in the world. He is the second highest run scorer in ODIs in this three year period, and his average of 82 shows how far above and beyond he is than the rest of the pack. No one has scored as many ODI tons as Babar has in this time, and the next best average is 27 runs away!

Is there a Fab list in ODIs or is he the only Fab ONE?

In T20Is, there is no one who has been as consistent as Babar has, barring Virat Kohli over the years and Mohammad Rizwan last year. In this 3 year period, Babar is the second highest run scorer, has the third best average, and the most number of 50s.

He is by far the best white ball batsman at the moment. No wonder the ICC also ranks him at the top in both formats.

Whether it is number of runs, average, strike rate (that slaps a lot of faces), centuries, or fifties, Babar is at the top of every list across formats in international cricket over the past 3 years.

I think we can safely put away any Fab lists, because Babar is in a league of his own.

He is the only batsman in the world who is ranked in the top 5 for each format. He tops the list for two of those formats.

Babar also has the most runs and highest average with the most number of centuries and fifties in all international cricket in the past 3 years. And in what is a big slap across some faces, Babar also has the best strike rate among the leading run scorers over this period.

Babar Azam is indeed the best in the world. And he is many years younger than most of the others on the list, which means he has much longer than the rest to dominate the cricket world!