It was a record breaking spectacle at the Gaddafi Stadium in Lahore with two of Pakistan’s best ODI batsmen at the forefront of this epic chase.

For too long now keyboard warriors in Pakistan, as well as, some renowned experts on TV and social media, have been labeling Babar Azam and Imam Ul Haq as selfish players. The kind who only care about personal glory rather than team victory.

These voices need to be laid to rest. These are the kind of people who are never satisfied with anything in life. There is no rational thought behind their statements, and absolutely zero critical thinking behind their judgments.

Despite Imam being at the center of this record chase, there were people complaining about how he did not finish the chase and blamed him for being selfish given he got out after scoring a century.

Seriously!? Were you even watching the chase?

For over 10 overs, Imam repeatedly attempted to hit a 6 or 4 off the first ball of the over. He did it successfully. He started taking these risks well before he got to his personal landmark. He did no different on the delivery on which he was caught at the boundary.

Imam played his part; the finishers had to play theirs. In the history of ODI cricket, have you ever seen an opener be there at the end in a chase of 350? Maybe you can count 2 instances out of a 1,000+ ODIs.

Imam, and Pakistan’s captain Babar Azam, scripted Pakistan’s win last night. These two are once in a generation type players and Pakistan needs to cherish them.

I just fail to understand how anyone can discount their match winning abilities. 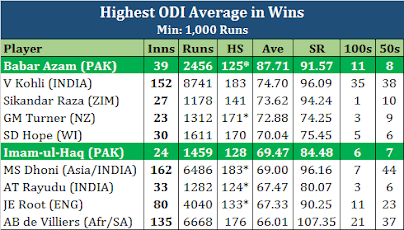 Babar Azam has the highest batting average in ODIs among all batsmen in ODI wins. His average is a clear 13 runs per innings ahead of Virat Kohli’s.

Imam is 6th on this list with a phenomenal average of 69.47.

They are two of the biggest ODI match winners produced by Pakistan!

Both Babar and Imam are among the few batsmen in ODIs that average above 50 in the format. There are only 11 such batsmen, and these two Pakistanis are among this elite list. 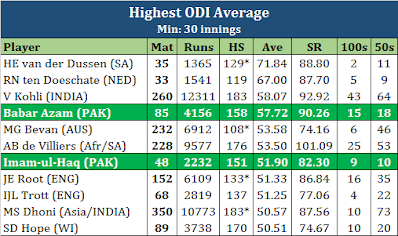 Babar is at another level altogether.

He is undoubtedly the best to ever play for Pakistan. Arguably the best ever in the world too. Among the current lot for sure; among all time players, we shall find out. He has a long way to go.

With his 15th ODI century yesterday, he got to the landmark faster than any other batsman in the world. And he reached 4,000 ODI runs faster than all other batsmen, barring Hashim Amla. 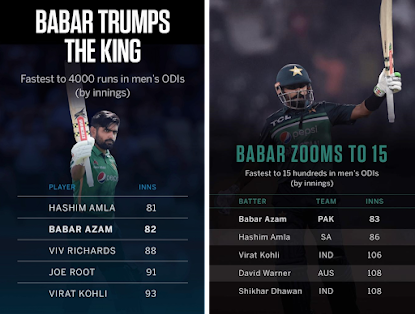 With 15 ODI centuries he now has the second most ODI centuries for Pakistan; level with Mohammad Yousuf and only behind Saeed Anwar. And he has not even played a 100 ODIs yet! 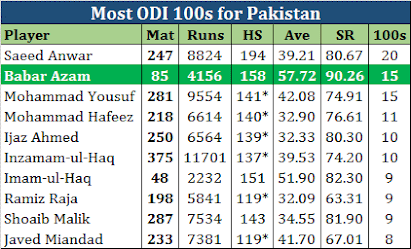 Look at that strike rate. Quite an eye opener who feel he plays too selfishly and slowly.

Imam Ul Haq is in the list too, just one behind his legendary uncle who is to blame for the unfair label given to him by critics.

Out of Babar’s 15 ODI centuries, 11 have resulted in wins, placing him third on the list of Pakistani batsmen with most centuries in ODI wins. 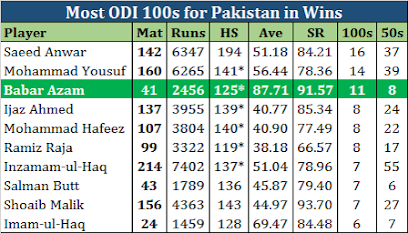 Guess who else makes this list. Yep, Imam Ul Haq!

Yesterday was Babar’s only 11th ODI as captain of Pakistan, and he notched up a 4th ODI hundred as captain, which is the most by a Pakistan ODI captain ever. 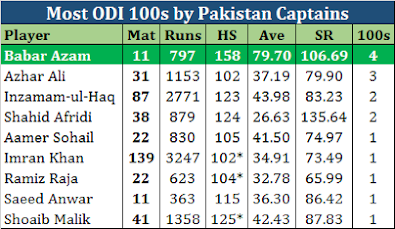 Considering that this 27 year old is just in the initial part of his career. He has a long long way to go, and I am sure he will be breaking and creating a number of batting records as he goes along.

Babar and Imam are Pakistan’s most consistent performers in ODIs. They have been for the past 5 years, which is why it shocks me no end that they keep receiving criticism from fans.

Failures of Pakistan’s middle and lower orders have resulted in many a defeat for Pakistan in ODIs; yet the ones to cop the blame are the top three, who more often than not play their part perfectly.

I really hope these critics can stay quiet now, especially after last night’s victory, but I have my doubts.