Less than a year ago, Virat Kohli was leading India across all three formats. He was the best batsman in the world too. The best in tests, the best in ODIs, and the best in T20Is.

Virat Kohli was the king.

If you follow Indian media (TV channels, newspapers, websites, commentators, and all other keyboard warriors), they will have you believe that Virat Kohli is finished. He is done.

I believe it is more media hype than anything else really.

Yes he is no longer the India Cricket Captain. But who is?

Rohit Sharma? He has barely played any cricket since being announced India’s all format captain.

KL Rahul? Where has he been?

Rishabh Pant? Yes, they handed him the captaincy too!

Shikhar Dhawan? He has found it tough to find a place in India’s first XI, but he too captained on a tour.

Ajinkya Rahane? He was Kohli’s deputy some time ago, but now finds himself on the bench.

Jasprit Bumrah? He’s leading in the current test against England, while the above mentioned (barring Pant) are absent.

That is 8 captains including Kohli in the last 1 year! Absurd.

But is he really finished?

There is no doubt that Kohli’s performance has gone down several levels over the past two years.

The level he was at for almost a decade across formats is a level that no other batsman has ever been at. He will likely never be at that same level again.

But he is also not over and done with the way Indian journalists will have you believe.

Look at his performance in T20 Internationals over the past two and a half years. No one from India comes even close to his level of consistency.

He is a clear 5 runs ahead in average than the next best batsman; and a good 10 runs ahead of everyone else from India!

You can take a look at all batsmen in T20 Internationals, and you will realize that only Mohammad Rizwan and Jos Buttler average more than Kohli does in the format during this period.

In ODIs, his performance has dipped a bit more. He is averaging 20 runs less than his career average during this 2.5 year period, yet he is still the third highest run scorer for India in this time.

Yes, he hasn’t scored any ODI hundreds during these 2.5 years, but no other Indian batsman has also scored as many fifties as Kohli has. 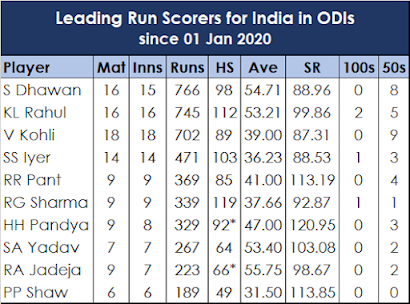 The fact that he has played more ODIs than any other Indian batsmen during this period goes to show his level of fitness, dedication, and commitment, which in my view is unmatchable.

The Sharmas and Rahuls are not even close, nor will they ever be, to what Kohli has done for Indian cricket, and continues to do.

Test cricket is where the real problem is. Kohli’s form in tests has really deteriorated over the past two years. His test average during this period is below 30 and for the first time in almost a decade his career test average has dipped below 50.

But has anyone taken a look at the other Indian batsmen around him?

Barring Rohit Sharma and Rishabh Pant, no India batsman averages above 40 in tests in the past 2.5 years.

I guess playing and touring in bubbles has taken its toll on everyone, not only Kohli. 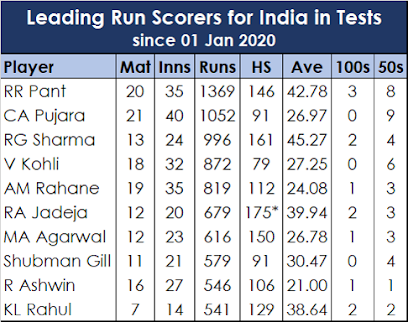 Yes, an average of 27 is not what you expect from a world class batsman like Kohli, but don’t only target him when talking about failures. Talk about the entire Indian brittle batting line up, which is being constantly saved by the likes of Pant and Jadeja.

There is also this hype about 120 odd innings across formats without scoring a 100.

What a heap of bullshit!

Leave aside the T20 format where no one scores 100s consistently (unless you are Jos Buttler), the last time Kohli scored a 100 in an ODI was 21 innings ago, and the last time he did it in tests was 32 innings ago.

Yes 52 innings / 2 years is a long time to go without scoring a century, especially when you are Virat Kohli who the world saw knock a century every other day. But Kohli is not alone.

Steve Smith hasn’t scored a 100 in a while. It has been quite some time for Kane Williamson too. I don’t see the media down under shredding them to pieces!

Kohli has been a champion batsman for way too long, and in white ball cricket he still is. He definitely does not deserve the criticism coming his way at the moment.

So what if Babar Azam is currently better than him in ODIs and T20Is? So what if Joe Root is now scoring like the run machine Kohli once was in Tests? So what if Kohli is no longer captaining India?

He is still one of the best in the business. Definitely the fittest batsman in world cricket. And more dedicated and committed than any other cricketer you will find in India.

Kohli may no longer be King, but he still is a Champion!

The Hundred, 2022 Match 8 BPH vs SOB Match Prediction Who Will Win Today Match