Babar Azam is ranked 1 in both ODIs and T20Is, while the second ranked batsmen are Imam Ul Haq and Mohammad Rizwan, respectively.

Shaheen Afridi is also up there ranked at 3 in the ODI Bowler Rankings.

I do not remember the last time Pakistan dominated white ball cricket in this manner.

They have been one of the best T20 teams for a while now, even leading the rankings for some time not too long ago. But in ODIs, they have been languishing in the bottom half of the table for almost a decade.

Till now that is.

Pakistan’s ODI form is so strong that out of the 6 completed ODI series since the ICC World Cup 2019, they have won 5!

During this ODI reign, Pakistan became the only Asian side to win two ODI series in South Africa, and they achieved their highest ever successful chase in ODIs, against Australia.

The ODI team has surely touched some great heights in this period.

Come to think of it, the resurgence began during the 2019 World Cup itself when they won 4 games in a row, but were unlucky to miss the semi finals due to net run rate.

They arguably were one of the best teams on show; and the only team who beat both the finalists during the group stages!

At the T20 World Cup in 2021, Pakistan were definitely the best team on show. They were the only team to reach the semi finals unbeaten.

Unfortunately though they were met by an Australian resurgence, which without fail happens at every World Cup.

Two ICC trophies have been denied, yet Pakistan has continued its vein of form.

Since that World Cup in 2019, Pakistan have a W:L ratio of 2.2 in ODIs; the second best among the full nations.

Even in T20 Internationals during this period, they have the second best W:L ratio among the full nations.

Pakistan’s batsmen have been in tremendous form in both white ball formats during this period, especially Babar Azam, the world’s best batsman currently.

Babar is the second highest run scorer in ODIs in this period, and his average is miles ahead of the rest. He has also knocked 7 ODI centuries in this time, more than any other batsman. Imam is also among the top 10 run scorers in this period. 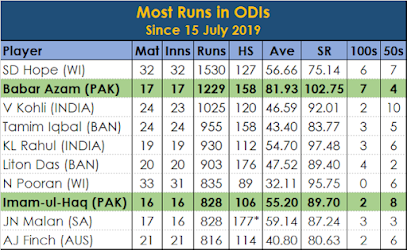 Babar has dominated in T20 Internationals too during this period, but it is his opening partner who takes the batting honors with the most T20I runs and by far the best average in this format.

Babar and Rizwan are also two of the three batsmen who have scored a T20I hundred in this period. 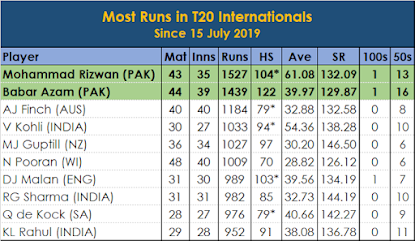 What has worked for Pakistan is that these batsmen have batted well in pairs. Its rarely a one man show and always a spectacle when you have Babar & Imam batting together in ODIs or Babar & Rizwan putting on a show in T20Is.

Look at Babar and Imam’s partnership average in ODIs over the past 3 years! 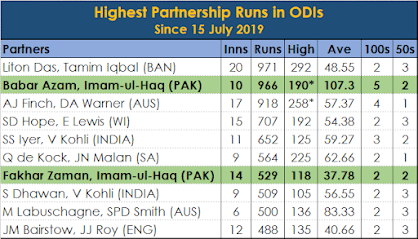 And look at the number of century stands Babar and Rizwan have put on in T20 Internationals in this period! 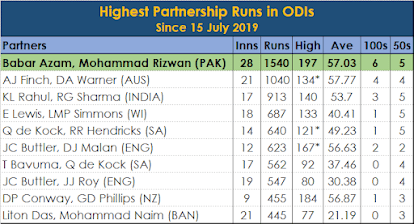 Pakistan’s rise in ODIs and T20Is could not have been better timed given the three upcoming white ball World Cups over the next three years.

The T20 World Cup gets underway in 3 months.

Sure the Pakistan fans would like to see them win all three World Cups, but then lets be realistic; it is Pakistan we are talking about, not Australia!

But I tell you what. At least one of those trophies has Pakistan written on it.

If Pakistan does not win at least one of these World Cups, then all this white ball form, the team rankings, the batsmen rankings, the partnership runs, this unparalleled success will all mean for nothing.

This resurgence needs to be topped with an ICC Trophy (or two) in the next 2 years.

It is not beyond reach, and if any Pakistan can do it, it is Babar Azam’s Pakistan!

Campaign To Save 1st Class Cricket