For the past couple of weeks, I have had several discussions over Whatsapp and Facebook on multiple groups regarding Imam Ul Haq.

All discussions have been the same. Majority of  the fans do not like Imam’s presence in Pakistan’s XI, and I fail to understand why.

Despite his twin hundreds in the first test against Australia at Rawal Pindi, Imam was heavily criticized after twin failures in the second test. That continued after the first innings of the third test.

It is not difficult to understand why Imam Ul Haq opened for Pakistan in the three tests against Australia.

He last played test cricket for Pakistan in 2019. He was dropped from the test team due to indifferent form. While he kept piling on the runs in ODIs, his test performance was not good enough for him to retain a place in the team.

That domestic performance influenced the selectors to include him in the test squad for the first time in three years for the series against Bangladesh in November 2021.

He didn’t play a test in that series as Pakistan preferred to open with Abid Ali and Abdullah Shafique.

Imam got his chance against Australia in place of the unfit Abid Ali. There should have been no question about the inclusion of a batsman who has averaged above 100 during the domestic first class season. Absolutely none!

Imam went on to justify his inclusion also when he became only the 10th Pakistani batsman to score centuries in both innings of a test match.

Yet, when he failed in the second test, the ever so critical fans were out for blood once again!

Do you really have no patience for someone who just scored hundreds in the first test? Or someone who had a stellar domestic season?

Why are you so fickle?

What bewildered me even more was the flak Imam received from these critics after Pakistan’s loss in the first ODI against Australia.

I just do not understand the logic behind blaming the only batsman who performed in the match.

Imam was the only batsman on Pakistan’s side that played his part. Fakhar, Rizwan, Khushdil, Iftikhar, and even Babar, who failed to convert his start, failed.

Yet it was Imam who was called “Useless”, “Why is he in the team”, among other things.

And people do not understand why that batsman who scored 103 is in the team.

I will never understand Pakistani fans I feel. Be passionate, we all are. Be critical too when the team loses. But don’t blame the poor kid, the only kid, who gave his best.

What amuses me even more is that Imam has faced these critics throughout his career, despite performing consistently in ODI cricket.

Since making his debut in October 2017, Imam is among the leading run scorers in ODIs.

He is among the handful number of batsmen that average above 50 in the format, and no one from Pakistan has scored more ODI 100s in this period than Imam. Not even Babar!

When compared with other ODI openers during this period, Imam is right up there among the best! 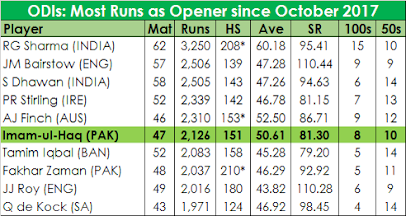 He is 6th on the runs tally, has the 3rd best average, and the 3rd most number of centuries among ODI openers over the past 5 years.

What more can you ask for from a consistent opener?

He may have been drafted into the team in 2017 due to his famous and influential uncle, but he has surely remained a part of Pakistan’s ODI set up due to consistent performances.

You cannot, just cannot, criticize or replace someone who has been one of Pakistan’s (and the world’s) best performer in ODIs

Imam, along with Babar, is Pakistan’s most reliable batsman in ODIs. I have no doubts that he will become just as reliable and consistent in test cricket also.

He is one the mainstays of the batting line up, and yet you guys want him out of the team?

Why do you all love to hate Imam Ul Haq?

For the first time in Pakistan’s ODI cricket history, the team has an opening pair where both of them average above 40!

Jasprit Bumrah ruled out of Asia Cup with back injury