by admin
in News

Sourav Ganguly rewrote history during the 1999 World Cup
match against Sri Lanka at Taunton. Many records fumbled during his 318-run
partnership with Rahul Dravid (145). The Lankan bowlers seemed clueless against
the onslaught done by the pair. India won the game by 157 runs and Ganguly was
awarded the Man of the Match for his 183 off 158 balls, 17*4, 7*6. It was no
less than a masterpiece.

Mahendra Singh Dhoni came to the crease in the first over
itself, following the early departure of Sachin Tendulkar while chasing a 299
against Sri Lanka in 2005. But he single-handedly changed the course of the
game with a majestic 183 off 145 balls. It included 15 fours and 10 sixes. This
was the first instance of a wicket-keeper scoring 183 in ODI cricket. India
chased down the target comfortably in 46.1 overs.

The third one is my favourite among the lot- Virat Kohli
against Pakistan in the 2012 Asia Cup. Batting first, Pakistan scored a good
total of 329 with the help of centuries from Nasir Jamshed (112) and Mohammad
Hafeez (105). In reply, India lost Gautam Gambhir off the second ball. It was a
must-win game for India and King Kohli delivered at the right time.

Pakistan were playing with five bowlers, but India worked
around the threat of Saeed Ajmal and Umar Gul initially by targeting others.
While Gul and Ajmal were given the respect they deserved, the shorter lengths
of Wahab Riaz and Aizaz Cheema were taken for runs, as was the quicker pace of
Shahid Afridi.

Kohli made handy partnerships with Sachin Tendulkar (52) and
Rohit Sharma (68) which took the game gradually from Pakistan.

He finished with 183 off 148 balls including 22 fours and 1
six. India chased down the target in 47.5 overs and Kohli was rightfully
adjudged the Man of the Match. 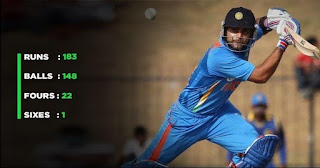 “This is the best innings I have ever seen,” is
how Pakistan skipper Misbah-ul-Haq described Kohli’s majestic knock of 183