Babar and Rizwan now have the 6th highest partnership runs in T20Is and they have got there in only 19 innings.

Babar and Rizwan truly are a golden pair and together they have taken Pakistan’s T20 cricket to new heights.

Everyone knows that Babar Azam is a superstar and currently one of the best all format batsman in the game. He, along with Virat Kohli, are the only two batsmen in the world that are among the top 7 of the ICC batsmen rankings for each format.

And Babar is number 1 in both T20Is and ODIs.

Babar is the most consistent batsman in the T20 format; however, it is Mohammad Rizwan, who is going through a dream run currently.

In 2021, Rizwan has scored more T20I runs than any other batsman in a calendar year, and that too at a bradmanesque average, which has only been matched by Kohli (in 2016).

Yesterday against Namibia, Rizwan posted his 9th fifty in T20Is this year, which is also the most fifties any batsman has hit in this format in a calendar year.

Before 2021 ends, Rizwan will undoubtedly become the first batsman in history to knock 1,000 runs in T20Is in a single year!

With an unbeaten knock of 79 last night, Rizwan created another T20I record – he now has the highest T20I batting average in the world. 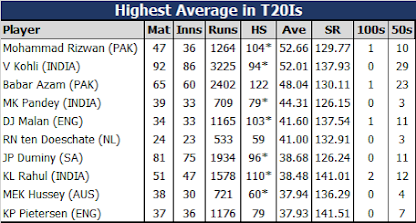 Rizwan is on the verge of another world record.

He needs 4 more runs to equal Chris Gayle’s record of scoring the most runs in all T20 Cricket in a calendar year! 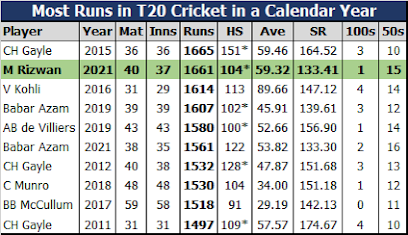 He went past the run tallies of Babar and Kohli during his knock yesterday.

A year, in which, Rizwan is breaking records held by legends like Kohli and Gayle, is nothing short of a phenomenal dream.

Rizwan is truly living the dream and he is growing with stature with every match. With Babar he has created a magnificent opening partnership for Pakistan, and individually he is undoubtedly the key man for Pakistan in T20Is currently!

The nicknames of Indian cricketers

The nicknames of Indian cricketers