Pakistan were Magical in Sharjah once again! | Well Pitched

Growing up in the UAE, I spent many days at the Sharjah Cricket Stadium watching the great Pakistan cricketers of the 80s and 90s.

Sharjah has been a happy hunting ground for Pakistan where I have witnessed some blistering centuries, fiery bowling spells, hatricks, match winning performances, and magical Pakistan wins.

The last time I was at Sharjah Stadium was in 2003 when Rashid Latif’s Pakistan played a quadrangular series against Sri Lanka, Zimbabwe, and Kenya right after the ODI World Cup.

It was a new look Pakistan team and Mohammad Hafeez was making his ODI debut.

18 and a half years later, it is the T20 World Cup, Pakistan is playing a match in Sharjah, and Mohammad Hafeez is still around.

The high of Pakistan’s first ever win over India in a World Cup was still not over and Pakistan’s next match, against New Zealand, was upon us.

The partying after the victory over India had still not ended, but we were ready once again! 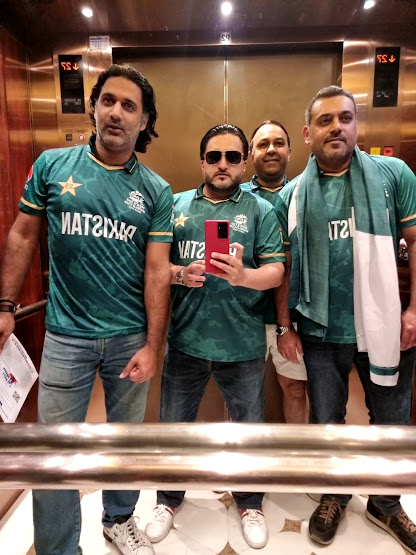 While majority Pakistan fans look forward to Pakistan vs India with more excitement than any other match; this time around the match against New Zealand was also awaited anxiously.

Only due to the abandonment that all Pakistanis felt when New Zealand flew out of Pakistan on the morning of the T20I series, citing security concerns.

Pakistanis had a grudge to settle.

And what better way to do that, than on the cricket field.

Riding high with confidence after defeating India, Pakistan were on top once again in Sharjah with an even better bowling performance that restricted New Zealand to 134.

However, unlike the clinical and professional chase that Pakistan produced on Sunday, this time around, the chase was more Pakistani!

Rizwan and Babar began in typical fashion, dominating the proceedings, however Babar fell to a rash stroke, which was totally unlike him.

The target was small, so there was no panic as Fakhar, who had been in great form in the warm ups, walked out for his first hit in the T20 World Cup.

Fakhar struggled to get going. There was some relief when he struck a ball right out of the stadium; however he fell soon after.

Mohammad Hafeez walked out and smashed his first delivery for a 6!

The chase seemed under control, till Hafeez fell to one of the best catches I have ever witnessed in a cricket ground.

Soon after though, there was a stutter, some panic, and a lot of tense faces in the crowd.

Half of Pakistan’s side was back in the pavilion and 48 runs were still required off 31 deliveries.

Asif Ali smashed a boundary of his first delivery leaving Pakistan to get 44 off 30.

It was close. Closer than most of us expected, following the 10 wicket thrashing of India. Though it was not something out of the ordinary.

As Pakistani fans, we have witnessed a number of botched chases and there were plenty of anxious fans around. Including me.

The worry, however, soon turned into jubilation as Shoaib Malik and Asif Ali upped the tempo.

Asif smashed Southee for two 6s in one over, Malik hit Santner for a 4 and a 6 in another and all was under control once again.

Asif sent another ball sailing into the stands of Trent Boult, and Pakistan finished off the chase successfully in the 19th over.

The Sharjah crowd was just awesome.

One friend pointed out after the match that there is something about matches against New Zealand.

The Birmingham crowd in 2019 was outstanding. It still stands as my best crowd experience ever at a cricket match.

This crowd in Sharjah was not too far off.

There were mexican waves, there was some great music bringing out a lot of dance moves, the cheering was just amazing, and the sledging with taunts about “security” was just hilarious. The flourish with which Asif Ali and Shoaib Malik finished off the game sent the crowd into a massive frenzy.

Our group was caught on camera multiple times during Pakistan’s chase. From our tense faces to our nervous clapping to my hulk gloves fist bumps after those 6s from Asif and Malik – it was all caught by the camera man in Sharjah. 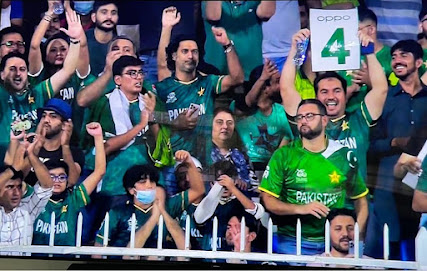 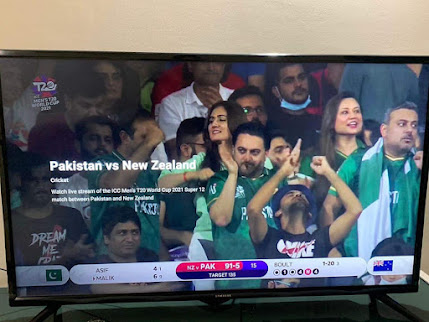 My phone was on fire every time we came on TV.

Thank you to each and everyone of you who captured images and videos on their TV screens and shared them. 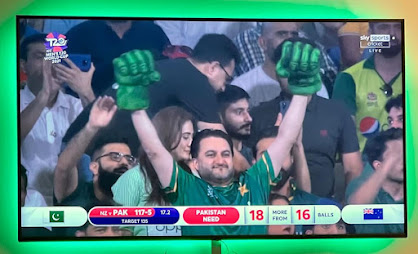 It was quite something to witness this chase by Pakistan, and to be captured several times by the camera man.

It was truly an unforgettable experience.

After these wins against India and New Zealand, the two toughest teams in their group, Pakistan are looking really dangerous in this T20 World Cup.

The best part about the win against New Zealand was that Pakistan’s two most criticized cricketers – Haris Rauf and Asif Ali – produced match winning performances.

While the win against India was a result of the dominance shown by Pakistan’s biggest stars – Babar, Rizwan, and Shaheen; this win against New Zealand came on the back of super efforts from the rest.

Haris produced a blistering spell of fast bowling, Asif smashed the bowling around like he has done so often in the PSL, Hafeez and Malik showed how valuable experience is, and Hasan, Shadab, and Imad were super with the ball.

This bodes really well for Pakistan for the rest of the tournament. With one foot in the semi finals, they are surely one of the favorites to win this T20 World Cup!