Pakistan isn’t playing any cricket at the moment, but the past two days have been quite happening for Pakistan cricket.

These resignations have Rameez Raja written all over them.

Rameez does not assume the PCB Chairman role till September 13; however he has been involved with the PCB from the day his appointment was announced.

His input was taken for the WT20 squad, and he had made his intentions clear regarding the future of Misbah and Waqar.

No dull day in Pakistan cricket!

Let us now get back to the most contentious subject – Pakistan’s squad for the WT20.

At first glance, I was disappointed with some of the selections. The inclusion of Asif Ali, Khushdil Shah, and Azam Khan did not make sense to me. The exclusion of Fakhar Zaman disappointed me. Even the sacking of Sharjeel Khan and Haider Ali could be argued.

And why does Haris Rauf keep getting selected?

The more I look at it, the more it makes sense to me, barring a few selections.

Pakistan’s opening combination of Babar Azam and Mohammad Rizwan in T20Is has done wonders for the team. In setting up totals and in chasing them down, including a recent record partnership and run chase, the two have been brilliant.

The inclusion of both Fakhar and Sharjeel in recent T20I squads only caused confusion in my opinion. Both are openers and do not really fit any where else in the batting order. Whoever made the call, made the right call, and made the captain’s and management’s life easier.

Barring Babar, Rizwan, and Hafeez, no other batsman was an automatic selection.

Neither the ones selected, nor the ones dropped, made any case for themselves over the past two years. 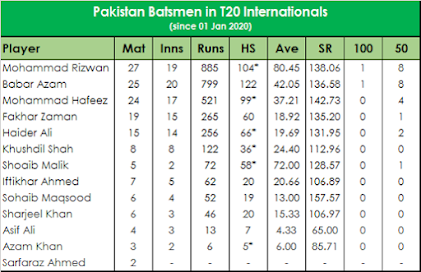 Among all batsmen that have played T20Is for Pakistan in the past two years, all have similar mediocre records.

Fakhar, Haider, Khushdil, Iftikhar, Maqsood, Sharjeel – none of them did any wonders to be selected. One can pick any three out of these and with Pakistan requiring middle / late order batsmen rather than openers, it probably made sense to pick Khushdil and Maqsood over the rest.

What doesn’t make sense though is the inclusion of Asif Ali and exclusion of Shoaib Malik. For the latter, it seems that the selectors believe his time is up.

I really do not understand why Asif keeps getting selected after failing over and over again at the international level.

Sure the PSL counts for something, but international performance should definitely be given more weight than PSL performance.

As for a reserve wicket keeper – Azam or Sarfraz – it really is a toss up. Go for the future, I guess; but is Azam Khan really the future?

All said and done, I feel that a batting order that reads Babar, Rizwan, Maqsood, Hafeez, Khushdil, Asif looks really strong on paper.

I would have definitely liked Shoaib Malik in place of Asif (actually even a rabbit is better than Asif), but all one can do now is hope that Asif replicates his PSL form in international cricket.

Pakistan has gone for 3 spinners in Shadab, Imad, and Nawaz. All three are decent batsmen as well, giving Pakistan’s lower order a good aggressive look.

However, the exclusion of Usman Qadir has raised some eyebrows, given that he has been Pakistan’s best spinner in the past two years; that too by some distance.

Qadir’s numbers are not easy to ignore. But I also understand that Shadab, when 100% and in full flow, is irreplaceable and playing two leg spinners is not really ideal.

I’m sure it was a difficult decision to choose between the two, but there is no reason why both of them could not be in the squad. Qadir should have been in there in place of Nawaz in my opinion, as Imad is a sure starter.

We all love to hate Haris Rauf, but the fact is that he has been Pakistan’s best bowler in T20Is for the past two years. 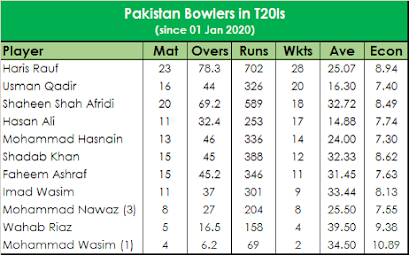 There is no difference in Rauf’s and Shaheen’s economy rate. And Wahab’s is worse. Plus Rauf has a better average than both of them. 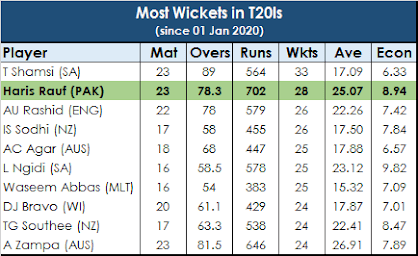 Then why do we hate Haris Rauf? Maybe it is because of his ODI performance, which is quite poor.

I think he deserves to play T20Is. He takes wickets and his economy rate is no different from some of the best pacers in the game.

So overall the squad is not all that bad.

The only change I would make is replacing Asif Ali with Shoaib Malik. However if the management believe his time is up, then replace Asif with Fakhar or Haider Ali. Either will be more effective.

Usman Qadir is a good to have, but if Shadab can regain his form then he will be just as potent as Qadir; not to mention the impact Shadab can make with the bat and in the field.

Pakistan plays 7 T20Is in the lead up to the WT20; 5 against New Zealand and 2 against England. That should give this squad enough time together in middle and should prepare them well for the big tournament.

The Hundred 2022 – Last summer, it was all fun and frolics

The greatest ODI innings which we haven’t seen on television

The greatest ODI innings which we haven't seen on television