The Beginning of something special for Pakistan Cricket | Well Pitched

It is not the morning after, two days have passed, and it still doesn’t feel right that Pakistan’s T20 World Cup campaign is over.

This World Cup seemed like it was ours, and that is why it hurts even more.

One could have been angry had the team played badly, had the batting collapsed, had Pakistan just not turned up. But they did, and they did everything right for the most part. The match seemed to be in the bag; till some brilliance from the other side that just took it away, leaving us in shock and disbelief.

While the disappointment remains, the past two days have allowed us to heal and reflect. There are plenty of positives, both for the team and its future, as well as, the fans of Pakistan Cricket.

Pakistan played this T20 World Cup like champions and were the only team that remained unbeaten in the group stages. Overall, they played 6 matches and won 5 of them – the same number as the two finalists; unfortunately the game we lost was the Semi Final.

The team looked united, played very spirited cricket, and were at the top of their game. This is surely not the end, but the beginning of something very special from this set of truly exceptional cricketers.

The cricket these boys played reminded me of the 90s. The difference; however is that this time the sum seems to be greater than the parts.

I have no doubt in my mind that this lot of players, under the leadership of Babar Azam, have a very bright future, and there is an ICC trophy waiting for them just around the corner.

SHAHEEN AFRIDI single handedly ended India’s campaign in two deliveries. India never really recovered from those two bolts. His deliveries to Rohit Sharma, KL Rahul, and then Aaron Finch were by far the best balls delivered in this T20 World Cup. As this team’s pace spearhead, he will win Pakistan many more matches in the future.

ASIF ALI & HARIS RAUF were the two most criticized players of the squad. Their lack of performance leading up to the T20 World Cup was a worry for everyone. Credit must be given to the captain and the management team who kept their faith in them. Both Asif and Haris completely repaid this faith with some exceptional performances.

Asif could not have chosen a better time to display his firepower, which we have all seen in the PSL, than at the grandest stage of T20 cricket. He will finish many more games for Pakistan in the future, like he did against New Zealand and Afghanistan.

Haris bowled some fiery spells against India and New Zealand, and he maintained his strong form throughout the tournament.

Similarly, FAKHAR ZAMAN and HASAN ALI, also had their fair share of critics. Both continued to fail in the group stages but Babar Azam maintained his faith in their abilities.

Fakhar was not even part of the initial squad of 15 that was announced and was included later at the insistence of Babar. Throughout the group stages, Babar kept saying that Fakhar is a big match player and he will deliver. He truly did by tearing apart Australia’s pace spearhead in the semi final!

Hasan, however, failed to perform as per expectations, but one can’t blame anyone for persisting with him considering his performance over the past 12 months. All sportsmen go through tough times, and Hasan will surely bounce back!

All those who believe that T20 is a young man’s format need to rethink their stance. The experience brought by the presence of MOHAMMAD HAFEEZ and SHOAIB  MALIK was invaluable. Hafeez was superb in the field and with the ball when required. His positive intent with the bat was a reminder to everyone of how this game must be played.

Malik’s calm presence in the middle against New Zealand helped finish the game and his ruthless attack on Scotland got him the record of the fastest 50 in T20Is for Pakistan.

I don’t know what they have decided for the future, but with the next T20 World Cup just a year away, maybe they will still be around.

SHADAB KHAN was not in the best of forms leading up to the T20 World Cup, but he is a proven match winner and he showed all of us why Babar had so much faith in him. He was fabulous with the ball in all the matches, picking up wickets regularly, and keeping the runs in check as well. With Shadab back at his best, Pakistan truly has the best bowling line up in T20Is.

IMAD WASIM is invaluable for Pakistan with the new ball. He was one of the most economical bowlers in the entire T20 World Cup with an economy rate of 5.7. He completes Pakistan’s all round bowling attack, which has more variety than any other bowling line up in T20 cricket.

MOHAMMAD RIZWAN is the Superman of Pakistan cricket, a true man of steel. I am still quite shaken by the fact that Rizwan spent 30 odd hours in the ICU before being declared fit on the day of the semi final. What a champion!

Since his transformation into Pakistan’s T20 opener, he has been simply sublime. During the T20 World Cup he became the first batsman to score 1,000 T20I runs in a calendar year.

He also surpassed Chris Gayle’s tally of 1,665 runs in all T20 cricket in a calendar year, and now has 1,743 runs in 2021. With still some T20Is left for Pakistan this year, Rizwan will take his lead at the top even further, and will likely remain there for a long time.

BABAR AZAM has been the best batsman in white ball cricket for some time now. In this tournament, he also grew in stature as a captain. The way he marshaled his troops, the way he united the team, the way he ensured everyone remains united even after defeat, are all traits of a great leader. He has a bright future ahead as captain and I for sure think that this team under him will reach even greater heights.

Babar ended his T20 World Cup campaign as the leading run scorer of the tournament.

I believe he is well on his way to becoming one of Pakistan’s and the world’s finest cricket captains.

Pakistan has never had a better opening pair in cricket than Babar and Rizwan. Together, they have scripted so many Pakistan victories in T20Is, and I am sure they will continue to do so. They are now 6th in the list of most partnership runs in T20Is, but their average of 62 and 5 century partnerships are unparalleled. We can look forward to many more T20I wins scripted by these two.

Pakistan’s performance in the group stages was truly fabulous and exceeded all our expectations. Yes, the semifinal loss was disappointing, moreso because we all felt this was Pakistan’s World Cup. They were the best team on show and the triumphant run was just glorious. This is definitely just the beginning for this special lot of cricketers.

For us, the World Cup came home to the UAE, which made it all the more special.

For the past decade we have traveled the world supporting the boys in green. From ODI World Cups in Australia and England, to T20 World Cups in Sri Lanka, to ICC Champions Trophies in the UK, we were everywhere.

This time, we were with the team from the start till the end, from Dubai to Abu Dhabi to Sharjah, from defeating India for the first time in a World Cup to coming so close to reaching the final.

It was a really memorable World Cup for all of us.

The best part was that Pakistan’s campaign reignited the passion for cricket among the youth in Pakistan. All the Pakistani kids were connected to the team and cheered them on throughout the World Cup. What this will do for cricket in Pakistan is immeasurable. 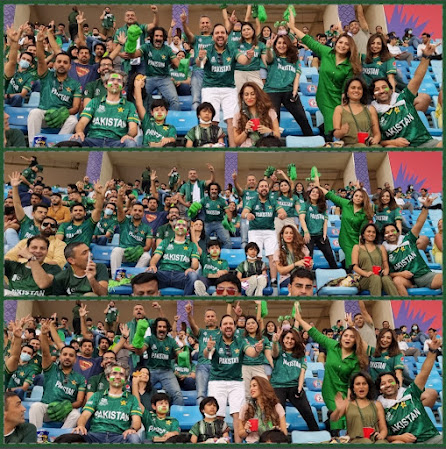 Even for this crew, this is definitely not the end. The Hulk Gloves will be back again.

The road to Australia 2022 begins now. Rest assured, we will be there, in all our greens, cheering on this champion team once again! 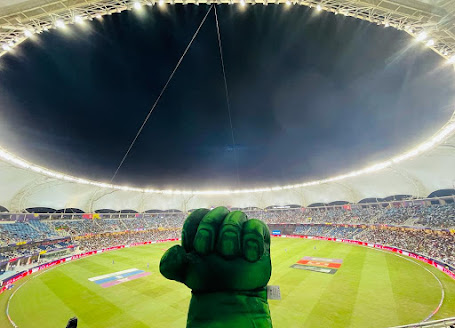