The ICC World T20 kicked off yesterday with Round 1 in Oman. The tournament is set to move to the UAE for the second round from Saturday, 23 October, where the big guns will take on each other leading up to crowning a new WT20 Champion on 14 November.

This is reflected in the performance of these teams over the past 22 months as well.

Only India and England have a better record than Pakistan in T20 Internationals since the start of 2020; and no team has won as many T20Is as Pakistan has during this period.

Clearly these three teams are among the favorites for the WT20 title, even though I feel the England batsmen will struggle on UAE pitches. Pakistan and India both, should flourish in this tournament.

Pakistan’s premier batsmen have dominated T20 Internationals since January 2020, with both their captain, Babar Azam, and Vice Captain, Mohammad Rizwan, sitting at the top of the run chart. 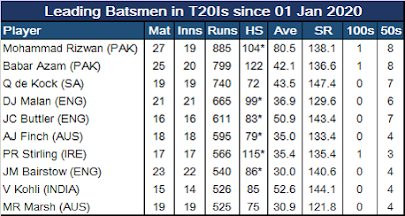 Babar and Rizwan are the only two batsmen who have a T20I century during this period, besides Ireland’s Paul Stirling. Both of them also lead the way in terms of 50s in T20Is, and Rizwan’s average is miles ahead of other batsmen.

Both of them have also struck their runs at an excellent strike rate.

Their opening combination in T20Is has done wonders for Pakistan and currently they are world leaders in partnership runs among all batsmen in T20Is since January 2020.

No one has scored more runs, or has put together more 100 run partnerships in T20Is since January 2020 than the pair of Babar and Rizwan.

While Pakistan’s top two batsmen have been fabulous during the past 22 months, the bowling has also been pretty good. 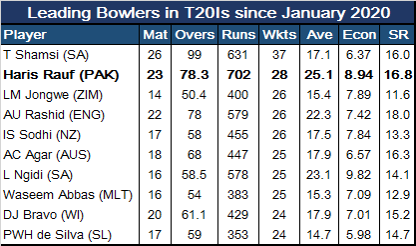 This might come as a surprise to most people, but Haris Rauf is the leading wicket taker among fast bowlers in T20Is since January 2020; and second highest among all bowlers, behind only South Africa’s Tabraiz Shamsi.

While his average and strike rate are the worst among the leading 10 wicket takers during this period, which is consistent with the general perception about his expensiveness.

Nevertheless, he is a consistent wicket taker.

Given the squad at their disposal and their recent track record, I believe Pakistan stand a great chance in this World T20.

For me, they are one of the semi finalists along with India from Group 2. From Group 1, I believe it would be England and the reigning champions West Indies.

Thereon, it should be anybody’s game, but definitely Pakistan are one of the favorites!

Why Virender Sehwag’s 195 against Australia is a masterpiece

Why Virender Sehwag's 195 against Australia is a masterpiece