There is no doubt that Babar Azam is the best white ball batter in the world currently. He is ranked 1 in both ODIs and T20Is.

There is also no doubt that Babar is also the best batter in the world across formats. He is the only batter ranked in the top 4 of each format.

I have no doubt that Babar Azam will become the first batter in the world to be ranked 1 in each of the three formats at the same time!

Virat Kohli, Ricky Ponting, and Matthew Hayden are the only ones who have achieved the number 1 ranking in each format; however none of them have held that ranking at the same time.

Babar soon will. You wait and watch.

Besides being a great batsman, Babar is also an impeccable captain. He has grown in stature with every game over the past two years, and he is fast becoming one of the best captains in the game.

Under Babar, Pakistan currently have a win percentage of over 60% in each of the three formats. They have pulled off some amazing victories during this time in T20Is, in ODIs, and even in Tests. The team has a new found belief under him and one can only imagine the great heights this team can reach.

Among the current crop of Test captains, Babar has the second best W:L ratio, behind only Pat Cummins. And his win percentage of 66.7% is behind only that of Ben Stokes and Dean Elgar.

Babar is also one of the only two Test captains in the past 2 years who are averaging over 50 with the bat. 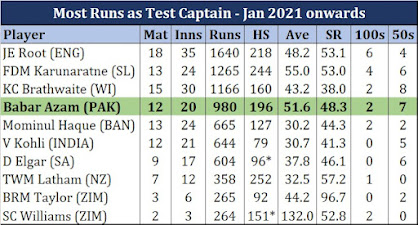 In ODIs, Babar sits second on the list of captains with the best W:L ratio and win percentage, behind Rohit Sharma.

As a batter, Babar has been phenomenal in ODIs. He has the most runs, highest average, highest strike rate, and most centuries as captain in ODIs since the start of 2020.

His average of 83.3 as captain is miles ahead of the next best. Even in T20Is, Babar sits second in the list behind Rohit Sharma in terms of W:L ratio.

As a captain in T20Is, Babar also dominates the T20I runs tally over the past 3 years with almost 300 more runs than the next best – Aaron Finch. He also has the second best average among captains, behind Kohli, and has the most number of 50s as captain – more than double of the next best. 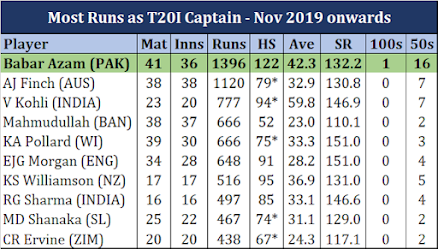 A true white ball maestro, Babar’s career is moving rapidly towards greatness. He is ruling in all three formats as a captain and as a batter. To think that he has at least another decade of cricket left in him, one can’t even begin to imagine where he will end up if he keeps continuing in the same vein.

We have not had a Pakistan team in a while that has been in the running for all three ICC trophies – the WTC, T20 WC, and the ODI WC.

At least one of those will be in Pakistan’s hands before the end of 2023.

If anyone can make it happen, it is the current best cricketer in the world – the one Babar Azam!