Last night, Babar Azam and Mohammad Rizwan gave the world the answer to that question.

The two stalwarts of Pakistan’s T20 team did not leave anything for Pakistan’s unreliable middle order batsmen and completed a record chase of 200, against England in the second T20 International, all by themselves.

They completely destroyed England’s bowling attack and romped home with a thumping 10 wicket victory, unlike any other in all T20 cricket.

When Babar and Rizwan bat the way they did in Karachi last night, Pakistan don’t need a middle order.

Babar and Rizwan shut down all critics questioning their presence as openers for Pakistan, their strike rate, their ability to utilize the powerplay to full potential, the pressure they were placing on the middle order, and all such garbage that was being said by experts and fans.

During the epic chase, Pakistan, along with Babar and Rizwan, created a number of records.

1. Pakistan successfully completed the highest run chase without losing a wicket in the history of all T20 cricket

Yes, the feat has not even been achieved in franchise T20 cricket, let alone internationals.

Pakistan now have two entries in the list of highest scores chased without losing a wicket in T20Is.

2. Pakistan became the first team to successfully chase 200 against England in T20Is.

3. Pakistan also became the first team in T20Is to defeat England by 10 wickets! 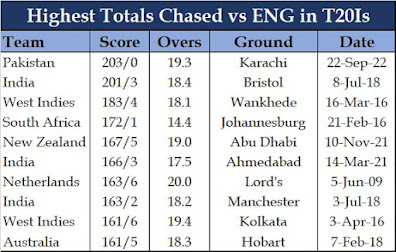 Not too long back they were ranked number 1 and number 2 in T20Is. The latest rankings have them at 1 and 4. I think when the rankings are updated next week, they will be number 1 and 2 again.

Undoubtedly, these two are simply the best in the world. What they achieved last night was quite unbelievable.

Having said that, if anyone had asked me before last night about which opening pair was the most likely to chase a score of over 200 without being dismissed in a T20I, I would have named these two!

Their ability to chase big totals in T20Is is quite unparalleled.

Babar and Rizwan now hold the record for 2 of the highest 5 partnerships in T20Is. 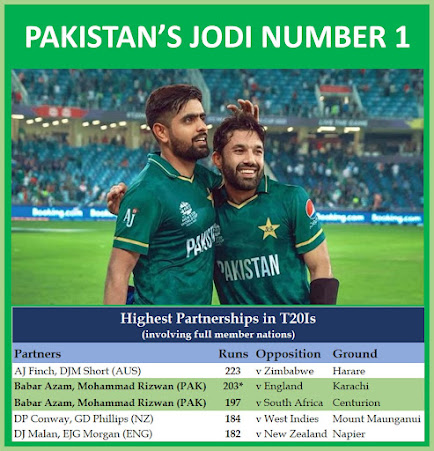 2. Babar and Rizwan are a part of all of the highest 5 partnerships for Pakistan in T20Is. 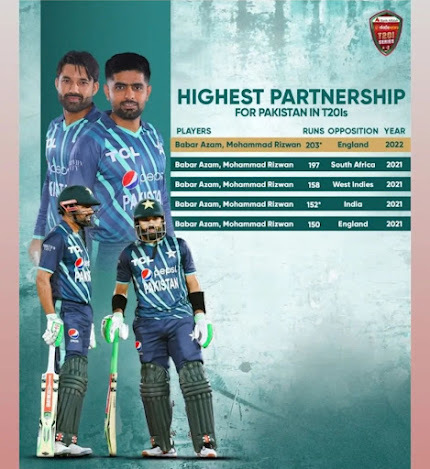 Babar and Rizwan broke their own record of 197, which they had put on against South Africa last year. 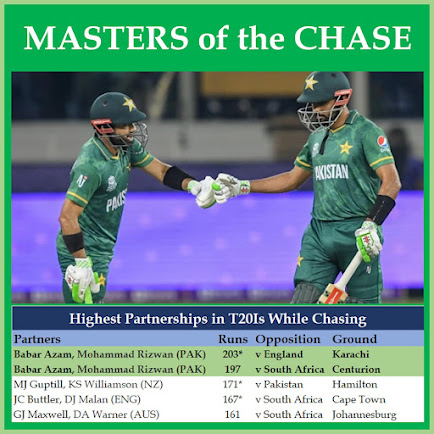 4. Babar and Rizwan, during their partnership of 203 last night, over took T20Is most prolific opening partners – Rohit Sharma and Shikhar Dhawan. 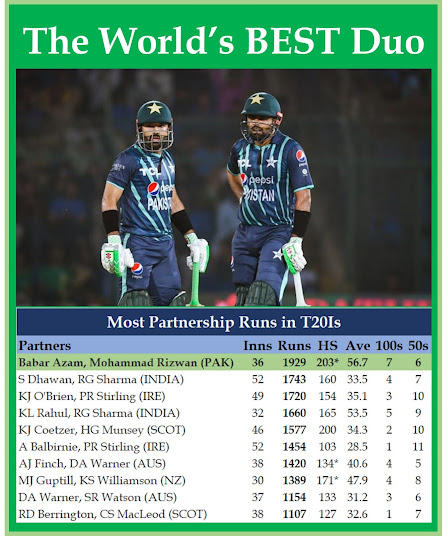 5. Babar and Rizwan are the best openers in the world in T20Is in terms of Impact.

Yes you heard that right. Anyone who has any reservations about their strike rates or their impact at the top of the innings is only delusional.

Not only do they have the top two averages among openers in T20Is, they also have strike rates as good as other openers around the world.

When measuring their impact, I used an adjusted average metric (Average x Strike Rate / 100) to determine the overall impact made by an opener in T20Is.

The result is here for everyone to see and wonder. 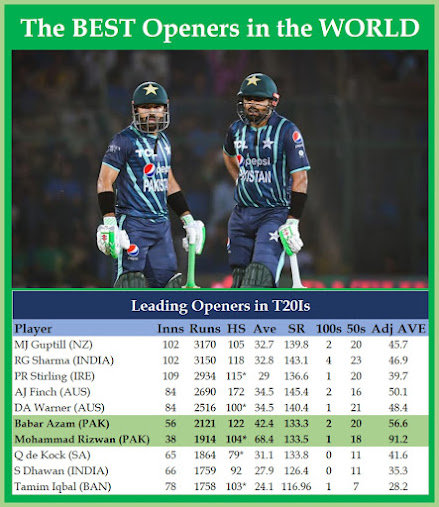 Anything I say about him will not be enough praise, nor will it do full justice, to the absolute talent that he is as a batsman.

Babar Azam is the best batsman in the world across formats.

Here is what he achieved last night with his epic unbeaten knock of 110.

1. Babar became the only batsman from Pakistan to score two T20I centuries.

2. Babar joined Faf Du Plessis and David Warner as the only three batsmen in this world who have scored a century in each format at the same ground – Karachi, the Wanderers, and Adelaide Oval, respectively.

3. Babar is now level with Rohit Sharma with the most (2) centuries in T20Is as captain.

He also has the third most runs in T20Is as captain; is only behind Virat Kohli in terms of average as captain; and is ahead of everyone else with 16 50s as captain. 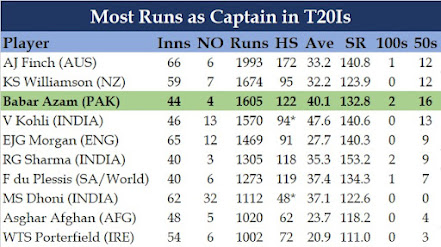 4. During his knock last night, Babar raced past 8,000 runs in all T20 cricket, getting there faster than all batsmen, barring one.

He got there in only 218 innings, 5 more than the Universe Boss – Chris Gayle. 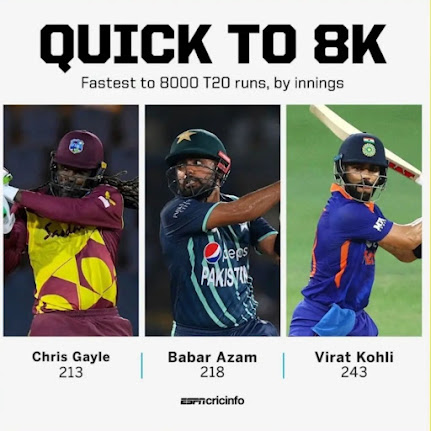 5. Babar’s 110* last night was his 10th century as captain of Pakistan across formats, beating the legendary Inzamam Ul Haq’s record of 9 centuries as Pakistan captain. 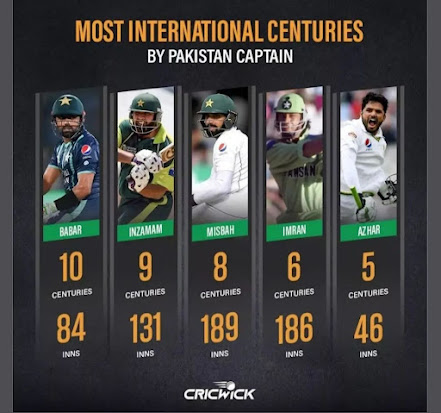 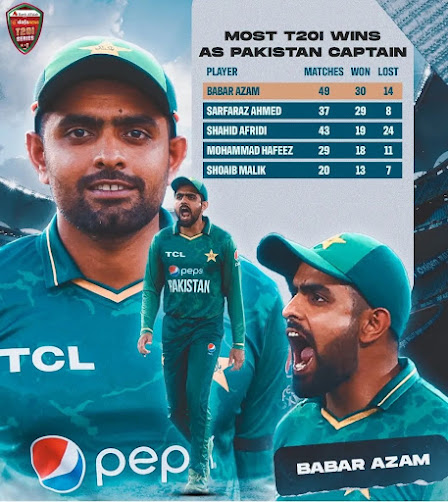 I am still in awe of what Babar Azam and Mohammad Rizwan achieved last night.

And I am still in shock at experts and fans who have been harping on about how Pakistan needs to change their opening combination.

Last night was a good reminder about previous chases of 208, 201, and 189. Of previous wins set up by Babar and Rizwan. Of the so many platforms that these two have provided this team.

Babar and Rizwan will not always do what they did against England in the second T20I of the 7 match series.

Pakistan has two champions at the top of their order who need to be cherished by one and all. Such batsmen are produced once in generations. Savor their performances!