Even though Pakistan won the first test against Sri Lanka, there are a number of questions that remain unanswered. Surely the captain and the team management can provide more insight on these queries, but no one has spoken about them yet.

Why is Azhar Ali still in the team?

Why was Fawad Alam dropped?

Why isn’t Shan Masood getting a game?

Why was Agha Salman preferred over Fawad Alam?

Babar Azam, Saqlain Mushtaq, and Mohammad Yousuf are surely more adept at selecting the playing XI and they probably know the right answers to the above, but I will attempt answering them anyway.

In both innings of the first test, he looked out of sorts, with scores of 3 off 41 deliveries and 6 off 32 deliveries.

Pakistan fans generally have very short memories. Their daggers were out immediately after Azhar’s two sluggish failures, and no one remembered that in Pakistan’s last test series, against Australia, he amassed 300 runs in 5 innings, including a solid knock of 185.

“oh but that was scored at home, he does nothing away from home”

Hellooo, who scored a double ton at the MCG? Surely the fans have forgotten that too.

Azhar has been one of Pakistan’s most dependable test batters in the past decade. 19 test centuries is no joke, neither are 7,000 test runs. The only Pakistan batters who have got more are the big 4 – Younis Khan, Javed Miandad, Inzamam Ul Haq, and Mohammad Yousuf. 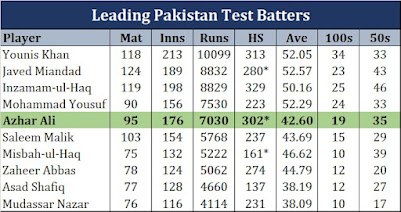 He is not in the same league as the big 4 but his test average is at par with the likes of Misbah, Saeed Anwar, Hanif Mohammad, Saleem Malik, and Zaheer Abbas.

Azhar may not be a test great, but he has given his fair share of great test knocks, and totally deserves his place in the side.

What the current and past team managements think of him will forever remain a mystery. Despite being the most prolific first class batter in Pakistan he was kept out of the side for 10 years. That too after scoring a debut test century.

When he eventually made a come back in 2020, he showed what Pakistan was missing by hitting test hundreds against New Zealand, South Africa, Zimbabwe, and the West Indies. 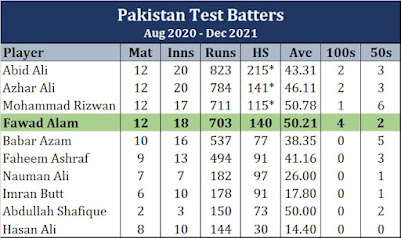 In 12 tests since his comeback, he scored 703 runs at an average of 50. In this period, he had more centuries than anyone else from Pakistan, was one of the only three batters to average 50, and was one of the mainstays of their batting line up.

Then he had one bad series against Australia and found himself on the bench for the first test against Sri Lanka.

I have no answer for this, and I hope someone can explain this with some level of reasoning.

For the past 5 years, Shan Masood has been plundering runs in domestic cricket in Pakistan. This year, he did the same in county cricket, which is why there have been many a cry from fans to include him in the playing XI.

Shan has had a start-stop career with Pakistan. Having made his test debut in 2013, he has played test matches every year for Pakistan since then, with the last one in January 2021.

After 25 tests, he has an average under 30. Despite scoring some match winning centuries, he is too inconsistent for Pakistan as an opener.

He has had his fair share of international cricket and shown that he is not consistent enough to be a regular Pakistan test opener.

Even when he had a record domestic season in 2018-19 in List A cricket, he was given a run in Pakistan’s ODI team and in 5 consecutive ODIs he managed only 111 runs at an average of 22.

While a prolific domestic runs scorer, I am afraid he cannot replace Pakistan’s current top order in any format.

How does someone with a first class average of 37 make it to Pakistan’s test squad in the first place is beyond me. How he makes it to a starting XI ahead of the likes of Fawad Alam (Test Ave 41, FC Ave 55) and Saud Shakeel (FC Ave 50) is just mind boggling.

The only reason I could think of was that he bowls handy off spin, which would be beneficial against the left handers in Sri Lanka’s line up.

But to sacrifice proper test batters for that, I am not too sure.

Are there no good off spinners in Pakistan that they could have, and probably should have, included in the squad?

Or play Nauman Ali instead of one of the pacers. Surely you don’t require 3 pacers at Galle.

Yes, Pakistan won the test, but the team selection was far from ideal.

With the next test also in Galle, I think Pakistan should put things right and bring back Fawad Alam in place of Agha Salman, and also bring in Nauman Ali in place of either one of the three pacers that played the first test.