In the third ODI of the series, both Babar and Imam continued their march of top form. So naturally, I am going to continue their praise from where I left it the other day.

These two batsman have been operating at another level. The number of runs, their averages, their contributions to victories, their centuries, have all been at unprecedented levels.

Babar’s and Imam’s batting averages are among the highest 5 averages in the history of ODI cricket (among all batsmen with a minimum of 1,000 runs). 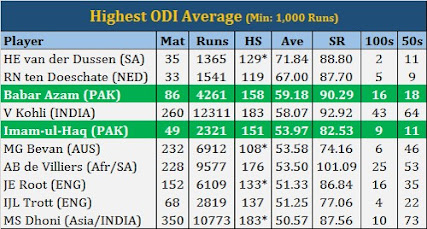 Babar now is ahead of Kohli by more than a whole run, while Imam has gone past ODI legends like Bevan, ABD, and Root.

If one considers batsmen with more than 2,000 ODI runs, then Babar sits at the top of the list of highest averages, with Imam at number 3.

Babar’s and Imam’s contributions in ODI wins are unprecedented. Both these batsmen raise their averages by at least 20 runs in ODI victories, as compared to their career averages.

Among all batsmen with at least 1,000 runs in ODI wins, Babar has the highest average in the history of ODIs, and Imam has the third highest ever. 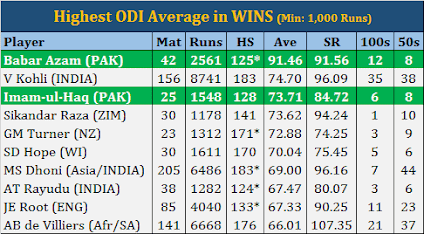 This shows the importance of the runs these two score. They are the cornerstone of Pakistan’s ODI batting line up and their contributions, more often than not, lead Pakistan to a win.

He currently has the third best average among openers in ODIs. 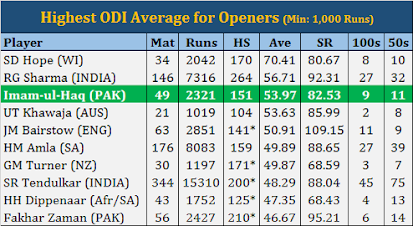 He also has the third best average among openers in ODI wins. 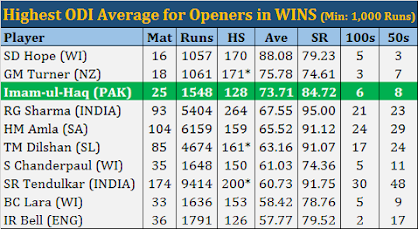 When Babar was appointed ODI captain, a large section of the public, including former players and experts, felt that it was a mistake.

They felt that Pakistan’s best batsman should not be burdened with the captaincy. They felt the added responsibility will hamper his batting. They felt he would not be able to cope with the pressure.

But nothing of that sort has happened.

Captaincy, in fact, has resulted in Babar elevating his game by a few notches.

This is evident from his ODI batting average as captain, which is currently 90.2 after 12 matches in charge. 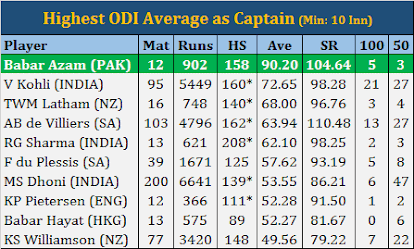 Yes it is still early days and there is a long road ahead for Babar as ODI captain, but the way he has started this stint is an indication of what the future holds.

Babar has shone brightly as Pakistan’s all format captain.

His ODI batting average and strike rate as captain are both significantly higher than his career’s.

Pakistan’s two highest chases in T20Is, record chase in ODIs, and record save in Tests have all come under Babar’s captaincy, and have all been possible due to Babar’s batting!

Babar has taken the opportunity to lead Pakistan head on and he has enhanced his batting form significantly since taking charge.

He is the only batsman in the world at the moment who ranks among the Top 5 in all three formats of the game; and he ranks NUMBER ONE in both white ball formats.

Arguably, he is the best batsman ever produced by not only Pakistan, but the World!