Pakistan is into the T20 World Cup FINAL !!! | Well Pitched

Can you believe it?

Rewind to a week ago and no one thought that in a week’s time, Pakistan would be on the verge of a second T20 World Cup win. It still feels unbelievable that we are there, Pakistan’s first T20 World Cup Final since 2009, but we are!

I have so many thoughts about this World Cup that I am not really sure where to start. I may end up rambling. Let me try to break it down.

It has been one hell of a ride for the past month, no less than a high thrill rollercoaster. It all started for me with the qualifiers when Namibia upset Sri Lanka on day 1!

I haven’t missed a single match out of the 44 that have been played so far. I have woken up at odd hours, I have had sleepless nights, but I have been glued to the TV since 16th October. Matches missed due to office hours, I watched later in the day. I watched every single episode of The Pavilion too.

The cricket has been so damn good in this World Cup. Every single game from the qualifying stages was total paisa vasool entertainment.

I have witnessed some amazing cricket, surprising upsets, nail biting wins, heartbreaking losses, some great batting, a lot of great bowling, and simply awesome competition between bat and ball.

I don’t remember a World Cup, especially a T20 one, where the fight between bat and ball has been this close, with neither form clearly dominating the other. With the exception of England’s onslaught against India.

I guess this has a lot to do with Australian pitches and conditions. If it were not for odd timings of matches for us, I would want every World Cup to be played in Australia.

After Pakistan’s shocking loss to Zimbabwe and a World Cup ouster in sight, I maintained that if one keeps emotions aside, this has been a rocking World Cup. Many unexpected results, very closely matched teams with most games ending in the final over, and just edge of the seat cricket!

That kept me hooked to all the matches even after Pakistan’s losses in their first two matches.

They are a blockbuster team, aren’t they? The drama that unfolds with Pakistan cricket at world tournaments is more thrilling and entertaining than any mega blockbuster movie.

You all would have seen the similarities with the 1992 campaign that have been circulating on social media.

Sure there are similarities, but more than that I feel that tournaments where Pakistan reaches the knock out stage from a hopeless situation, are the ones that they go on to win.

And tournaments where they dominate the group stages, are the ones where they fumble in the knock outs.

Nasser Hussain and Harsha Bhogle put it aptly – “When Pakistan are tagged favorites and their fans’ hopes are high, they always disappoint. And when you write them off, that is when they come back to play their best cricket!”

In the last three matches against South Africa, Bangladesh, and New Zealand, Pakistan definitely played some of their best cricket.

The two matches they lost were off the final ball. Such a fine margin. Both matches could have gone Pakistan’s way so easily.

Pakistan are an amazing team, one of the best T20 teams in the world as records suggest, they played their 6th T20 World Cup semi final – more times than any other team, they are going to play their third T20 World Cup Final – also the most by any team (albeit jointly), they are truly Box Office!

THE EMOTIONS OF A PAKISTAN FAN

I guess it is the passion, or maybe a lack of faith in leadership, which is borne out of many other issues with the country, or a genuine lack of understanding, or maybe they have short memories and lack patience.

It could also be a combination of all of the above, but one thing is clear – no other cricket fan is sent into a thrilling ride with so many twists and turns than a Pakistan cricket fan.

As I said, Box Office Blockbuster.

There was heartbreak and a lot of disappointment after the loss to India in Pakistan’s first match of the T20 World Cup. I know many people who stopped following the World Cup after that match.

It was disappointing to lose undoubtedly, but I felt at the time that the boys played one hell of a game.

A game they should not have lost, but a game that was taken away from them by the best batsman of our generation who played the best knock of his T20 career!

I felt that the boys gave it their all in the match, and I feared that because of the result they may not turn up fully switched on for the next match. It was a physically and mentally draining game, and to bounce back from something like that is nothing short of a miracle.

I had no idea how the team would pick themselves up for the next match.

What I feared came true as Pakistan imploded against Zimbabwe. That result sent the entire nation into shock and all the fans into an emotional frenzy.

I heard all sorts of crazy statements.

“Pakistan do not deserve to play the world cup”, “Babar is not a good captain”, “Babar and Rizwan should not open, they are wasting the powerplay”, and so on.

For the more optimistic fans, the ifs and buts scenarios started.

Pakistan needed to win all of its remaining matches, and then hope for other results to go their way. Some results were likely, others quite unlikely.

After South Africa beat India, the door seemed shut on Pakistan. Everyone I know had lost all hope.

I also felt that Pakistan’s campaign was over, but I maintained that let the team play and win its games, and if its meant to happen, things will fall into place.

On the eve of the last day of the Super 12s, I had a very strong feeling that I shared with most of my friends.

Some laughed, some hoped, some promised me all sorts of things.

I truly felt it as I went to sleep earlier than ever to wake up at 4AM to watch South Africa vs Netherlands.

Yet, the critics remained.

Yes it was a “backdoor” and unbelievable entry into the semifinal for Pakistan, but at the end of the day the two best teams from the group qualified.

For those saying South Africa deserved it more makes no sense at all to me given that Pakistan thrashed South Africa.

For all those saying South Africa would have qualified had their match against Zimbabwe not been washed out – please go look at the NRR. Even if South Africa won that match, Pakistan would have gone ahead with a superior NRR.

Yes the two best teams qualified. Doesn’t matter who won the earlier matches and who won the later ones.

When it mattered, Pakistan won!

“BABAR IS NOT A GOOD CAPTAIN”

I have always maintained that Babar Azam is Pakistan’s true leader. The way Babar has backed his players, motivated them, and kept the team spirit alive, is unlike any other Pakistan team I have seen in the past 2 decades.

Babar is a phenomenal leader.

His biggest criticism has been his tactics, especially the bowling changes in some crucial matches. But then that can go either way. Some work, some don’t.

In my view, he may not be the most tactically sound captain, but he is the kind of leader that the Pakistan team needs. He should be at the helm for as long as he plays, and Pakistan will do wonders.

All criticism is a load of BS in my opinion.

“BABAR AND RIZWAN SHOULD NOT OPEN”

This has been going on for a while, and largely it is do with their strike rates.

Babar just could not get going in any of the five Super 12 matches. Rizwan still had a couple of scratchy innings in two matches. But they both were far from their best and quite out of form.

The attacking stroke play in display from the bat of Mohammad Haris, brought in at the last minute due to an injury to Fakhar Zaman, escalated the voices demanding a change in Pakistan’s top order.

Now here is the thing. 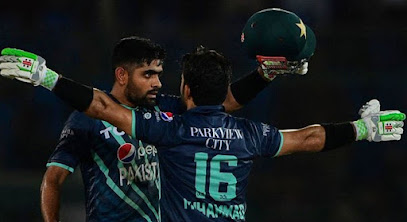 Do you break something up that has worked for you for two years on the basis of 5 innings? Do you change your plans overnight because your two best batsmen are not in form?

On the basis of that sample size how do you make a judgement to make Haris open instead of either of Babar or Rizwan?

Babar and Rizwan came out to open in the semifinal and they batted as if nothing had ever changed.

Both knocked fifties and ensured Pakistan’s march into the final on the back of a successful chase that Pakistan’s openers are experts at.

Is the way well marketed by the likes of England, India, and Australia, the only way to play?

Surely not, as Babar and Rizwan are the only openers who have successfully chased scores in excess of 190 on multiple occasions. You cannot say that about the Buttlers, Warners, Finchs, Rahuls, Sharmas of the world.

There is a method to their madness, which they believe in. Majority Pakistan fans and critics will keep harping on about strike rates, while Babar and Rizwan will keep winning you games.

WHERE DO WE GO FROM HERE?

To the final ofcourse!

To hell with all the criticism, Pakistan is going to play their third T20 World Cup Final!

Yes it is like 1992! It is Pakistan vs England in the Final of a World Cup at the MCG! 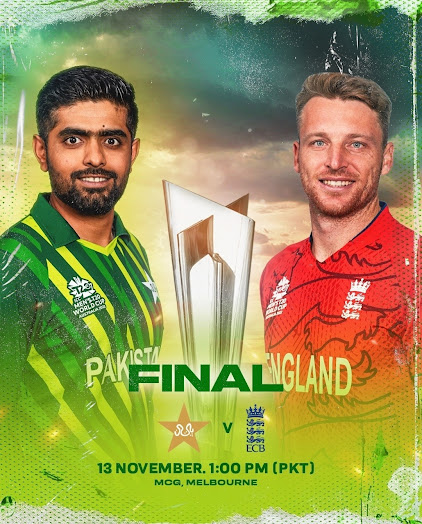 Despite all these similarities with 1992, there are some parallels that can be drawn with the World T20 in 2009 as well.

Back then, I had arranged a viewing party for Pakistan’s semifinal and final at Time Cafe at Ramee Royal Hotel. There was a lot of coordination, a lot of requests made to the cafe, and about 25-30 of us witnessed Pakistan’s World T20 win together.

This time around, there is another venue, but the same arrangements and coordination has been taking place. A good bunch got together to watch Pakistan’s semifinal, and an even bigger lot will be there on Sunday to witness the T20 World Cup Final! 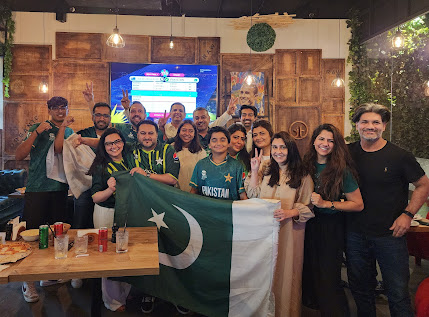 In this World Cup, Pakistan has peaked at the right time and I can’t believe that we are one match away from becoming World Champions one more time!