Azhar Ali is probably the most under rated batsman ever to play Test Cricket for Pakistan. I am not too sure why he does not get the respect that a batsman like him deserves.

The only Pakistan batsmen ahead of him are the greats Javed Miandad, Inzamam Ul Haq, Mohammad Yousuf, and Younis Khan.

I get that he can’t be classified as a test great given that his average is quite far from the coveted 50 mark, but he has been the mainstay of Pakistan’s test batting line up for the past decade.

He is also the best test number 3 that Pakistan has had, barring the great Younis Khan.

As soon as Pakistan’s 18-man squad for the Test Series against England was announced, there were a number of fans questioning the presence of Azhar Ali.

Maybe it has something to do with him not playing ODIs and T20Is, and the fans forget the value Azhar brings to the test side?

Maybe some fans don’t fully understand the requirements of a batsman like Azhar Ali in a test batting line up?

I am really not sure what it is.

Especially considering he scored a 185 against Australia in the last home series that Pakistan played; in a game where no batsman from Australia got to a 100!

Some fans pointed out that Azhar has been living of past achievements and does not deserve to be in the team based on recent performance.

WHAT ARE YOU TALKING ABOUT!?

And I can name a few big names from other countries, as well as, those from the “Fab 4” who are not in this list. Yet they continue to feature in Test Cricket.

Only our fans can have issues with such stars of the game.

I have another stat for you all.

Here are the best performing number 3s in Test Cricket over the period 2020-22. 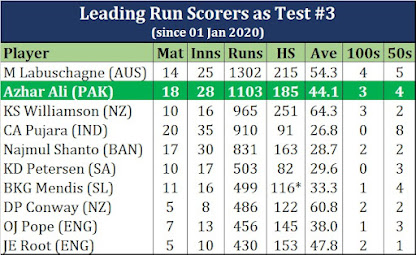 I really wonder what these fan critics are on.

And it also does not make sense to drop someone who has been performing consistently!

Here is a summary of his performance in Pakistan’s recent Test Series.

So where is the failure?

The only series where he failed was against West Indies.

A player is allowed 1 bad series in 3 years; or do Pakistan fans not have the patience for that either?

He has scored runs in every series, against all opposition, in all conditions home and away!

I will never understand the criticism against him.

Azhar is the mainstay of Pakistan’s test batting line up, one of the best test batsmen produced by Pakistan.

I hope the fans will leave him alone, give him some respect, and let him play for as long as he keeps scoring valuable runs for the team.

Getting Your Online Slot Winnings in Cash Right Away