The franchise made the announcement on its social media handle.

Durban’s Super Giants (DSG) have officially announced star left-hander Quinton de Kock as the skipper of the side ahead of the inaugural SA20. Cricket South Africa (CSA) introduced the all-new SA20 in order to revive domestic cricket with six teams taking part in this edition.

The new league of SA20 provided the platform for youngsters to rise to the occasion. Also, to perform their skills and get one step closer to making it to the national side.

The Durban Franchise took to its social media handle to announce Quinton De Kock. As the players who will be taking the leadership responsibilities ahead of the new season.

The new league in SA20 provides a platform for youngsters to rise to the occasion and exhibit their skills and get one step closer to making it to the national side. The Durban franchise took to their social media handle. To announce Quinton de Kock as the player who will be taking the leadership responsibilities ahead of the new season.

“Aye, Aye Captain! #SuperFam, Quinton de Kock is all set to don the captaincy. If you are eXXcited to see him lead our ship,” announced the franchise on their Instagram handle. 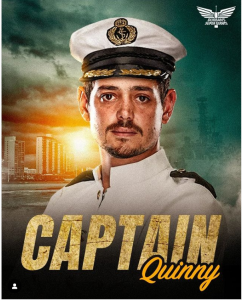 The Durban side owned by the RPSG Group, which also owns Lucknow Super Giants (LSG) in the Indian Premier League (IPL). And interestingly, de Kock currently plays for the LSG in the league. Similarly, other sides too participating in the competition owned by the IPL franchises. The impending SA20 2023 is set to commence on 10 January to 11 February 2023. Which follows a double round-robin format with two semi-final fixtures and a summit clash.

De Kock excited to take up the captaincy:

The skipper of the DSG, Quinton de Kock earlier this week opined that he is eager to kick start the new competition apart from the IPL. SA20 will provide a good platform for the young participant.

“Pretty much it’s a new tournament, so, I guess looking forward to the unexpected, we’ve had a couple of these tournaments, and there hasn’t been one in a while. A lot of youngsters who haven’t been part of the big tournament will be involved in this. So it will be good for the new guys and obviously for the guys who’ve been around in serving cricket. This is also new for us, so, this would be amazing another new competition so I can’t wait.”  De Kock concluded in an interview.

There’s a lot of crap spoken about pitches

Mahesh Pithiya Reveals His Experience Of Bowling Australia In Nets

NS vs TO Dream11 Prediction, NS vs TO Today’s Match.