Morrisville Samp Army are all set to cross swords with New York strikers in the 1st  Qualifier round of the Abu Dhabi T10 League 2022. Also, both sides are coming off wins from their previous matches and have an understanding of the behavior of the pitch conditions at the Sheikh Zayed Stadium.

The New York Strikers also won the recent match playing against Team Abu Dhabi. But also registered their first win at the tournament this year against The Chennai Braves. The Kieron Pollard-led side will look to maintain the momentum and clinch another victory against the Morrisville Samp Army

On the other hand, the Moin Ali -led Samp Army Won their opening match against Bangla Tigers and maintained the momentum. Also, swiftly got back to winning ways in the next game that they played. Although, The side will face a rather tricky outing against the in-form and will look for a tough game against the strikers.

The New York Strikers have topped the table with 12 points while the other side is with the 10 points on the second position. The shortest format will call off the game will call the nail bitting moments for the cricket fans.

The pitch at the Sheikh Zayed Stadium can witness scores over 110 in 10 overs. But the onus is on the batters to make the most of the batting-friendly surface. Skipper winning the toss could elect to field first so as to have a target in mind. However, batting first too will not be a bad idea.

Top Performers from NYS vs MSA

K Jannat will be our captain and J Thompson will be our vice-captain because of their fantastic capabilities and consistent contributions. 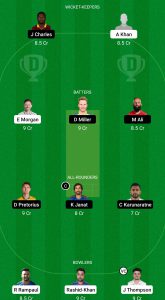 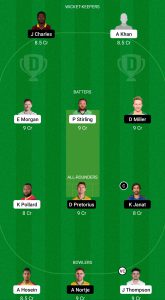 Live Streaming Of Bangladesh Vs India: When And Where To Watch BAN Vs IND 1st ODI Live

Live Streaming Of Bangladesh Vs India: When And Where To Watch BAN Vs IND 1st ODI Live

Get him out of his comfort zone”