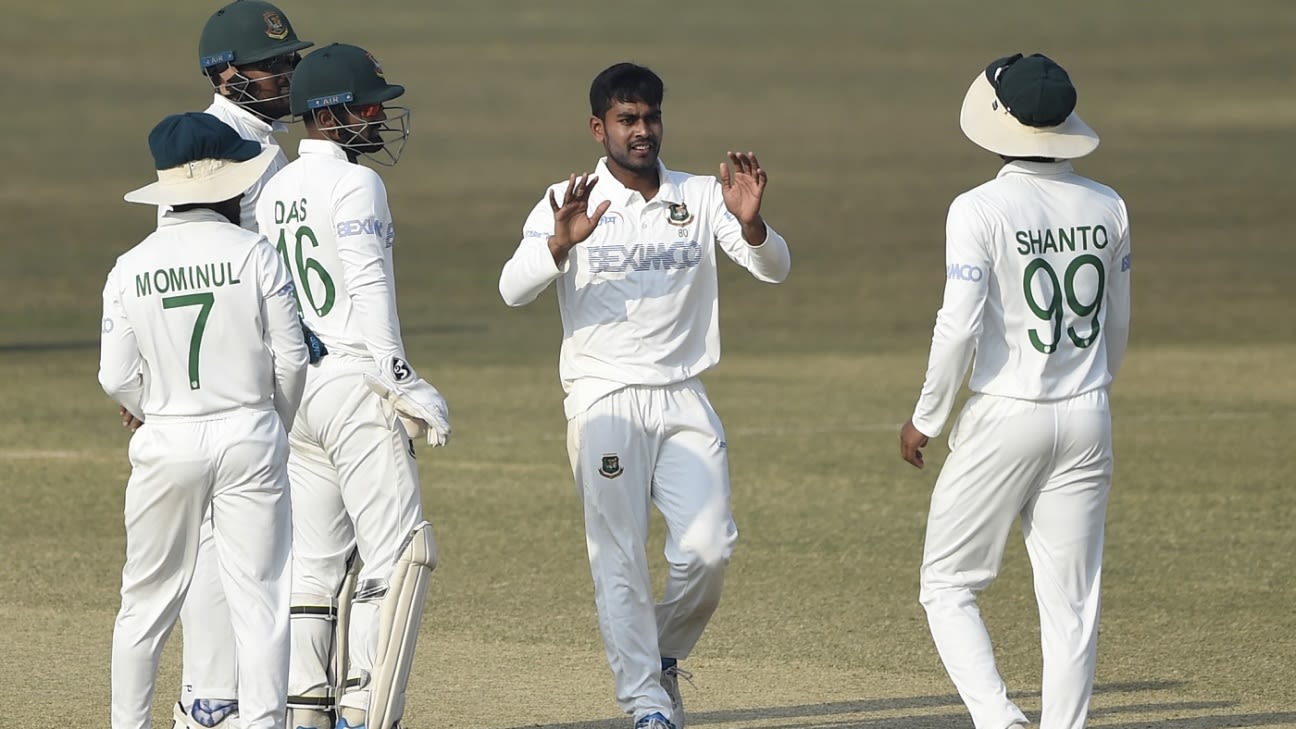 Bangladesh are closing in on their their fifth overseas Test win after reducing Zimbabwe to 176 for 7 by lunch on the fifth day of the one-off Test. The home side lost four wickets in the space of 19 balls and added just 36 runs from the overnight score of 140 for three, with Taskin Ahmed and Mehidy Hasan Miraz taking two wickets each. Zimbabwe were still 300 runs adrift of the 477-run target Bangladesh had set them.

Dion Myers and Donald Tiripano frustrated the visitors by playing out the first hour when Bangladesh also dropped three catches. Myers was dropped by wicketkeeper Liton Das and Shakib Al Hasan at slip, while Taskin Ahmed dropped nightwatchman Tiripano off his own bowling. Tiripano is now unbeaten on 27.

However, Miraz made up for it with two wickets in four balls just after the first drinks break, after having removed Brendan Taylor on Saturday. He got Myers caught at short midwicket, before trapping Timycen Maruma leg before for a duck. Roy Kaia fell in the same way to Ahmed in the following over, when he looked all at sea. Both Kaia and Maruma got pairs in this game.

Taskin then sent Regis Chakabva’s middle stump for a walk but a no-ball denied him from doing the same to Victor Nyauchi in the next over.

On Saturday, Zimbabwe captain Taylor rocked Bangladesh with his counter-attacking 92 off 73 balls. When he reached his fifty off 33 balls, Taylor equalled Andy Blignaut’s record for fastest known Test fifty by a Zimbabwean. Bangladesh had declared at 284 for 1, courtesy centuries from Shadman Islam and Najmul Hossain Shanto.

Meanwhile, it will be the last day of Test cricket for Mahmudullah, who announced his retirement from the longer format, on the third day. On Sunday, the Bangladesh players gave him a guard of honour and let him lead out the team to the Harare Sports Club ground.