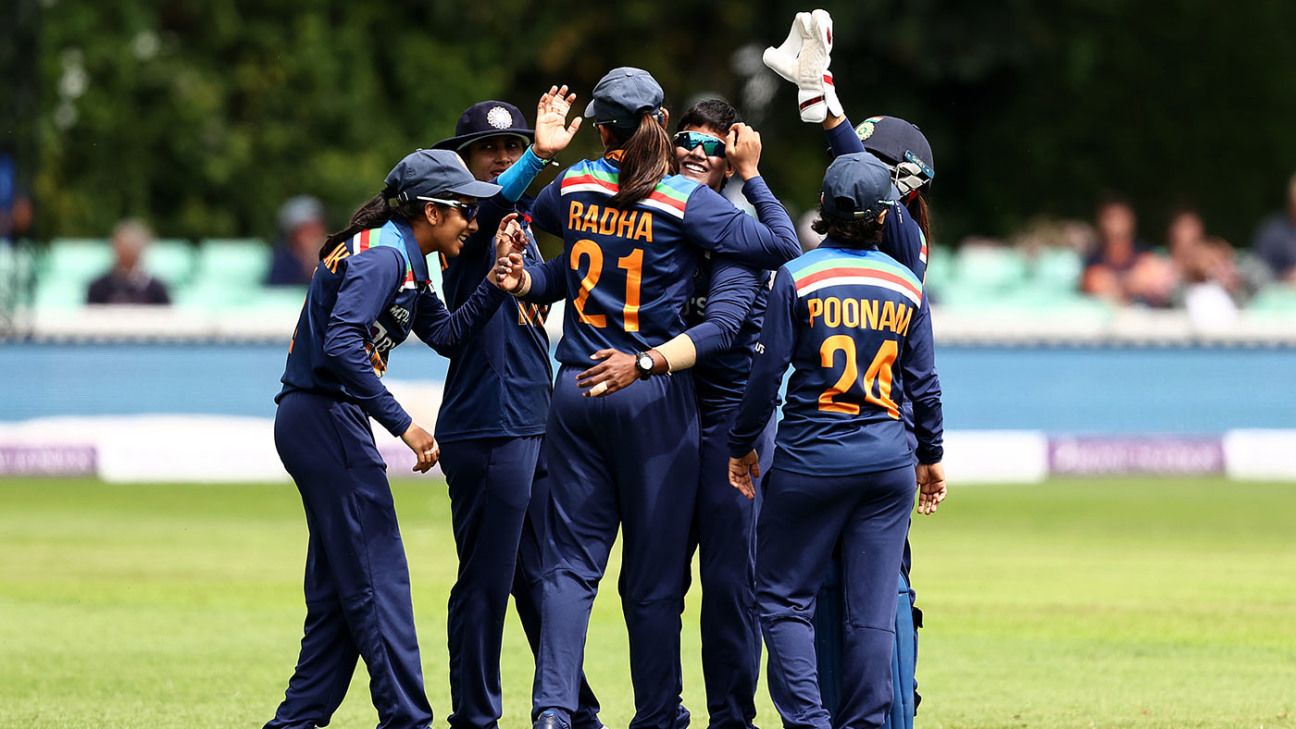 Sciver’s 49 and Knight’s 42 lift England on a rain-affected, 47-overs-a-side contest

Nat Sciver‘s 49 and Heather Knight‘s 46 lifted England to a total of 219 in a rain-affected, 47-overs-a-side contest. Deepti Sharma was the other star performer in the third ODI on Saturday, finishing with a vital three-for. No. 11 Kate Cross’s unbeaten 9-ball 16 somewhat rained down on India’s parade after their six-pronged attack, each of whom picked up at least a wicket, threatened to restrict the hosts to a less formidable score.
Seamer Shikha Pandey made early inroads after India opted to bowl at the County Ground in New Road following a rain delay of over an hour and half. Opener Tammy Beaumont, playing across the line to an incoming delivery from outside the off stump that also kept low, was trapped in front in the second over.
Conditions remained overcast and a touch windy as Lauren Winfield-Hill and Knight steadied England after Beaumont’s departure, her first scoreless innings in ODIs since November 2016 and fourth overall in the format. After surviving a soft lbw appeal in the first over and later a stumping opportunity off a wide ball in the third – both off Goswami – Winfield-Hill carted Pandey for three fours in the eighth over, the costliest in the innings, clubbing drives square off the wicket and down the ground.

Raj introduced a double change after the completion of the reduced, nine-over powerplay that saw England make 44 for 1. Sharma and Poonam Yadav’s spin replaced the pace of the Goswami-Pandey tandem and gave away 23 runs for a combined seven overs leading up to the 17th.

Sneh Rana kept busy during that phase at widish first slip, with thick edges off Knight and Winfield-Hill flying past her off Sharma’s offspin as early as the bowler’s first ball. The second of those edges, served up by Winfield-Hill when she was on 24, kissed Rana’s fingertips.

In Knight’s company, Winfield-Hill brought up the team fifty in the 13th over and strung a second-wicket partnership worth 67. Rana’s introduction as the third spinner, though, saw Winfield-Hill sweep down Pandey’s throat at deep midwicket for 36 as India’s tactful field placements bore fruit.

Knight then steered the rebuild helped in no small part by Sciver’s brisk scoring. Her belligerence forced Pandey’s second spell to last only one over as Raj turned to spin again. It took Harmanpreet Kaur five balls to break the 42-run third-wicket stand as she forced a rare mistake from Knight, who, after reaching the 3000-ODI-runs milestone, swept hard only to find Pandey at midwicket.

Sciver scored nearly at a-run-a-ball for the most part of her stay. Off Kaur’s third over, she clobbered two fours, an emphatic display of wristy flicks and exquisite square drives.

Goswami then returned for her second spell, having gone for just 15 of her five-over first spell. Her keeping a tight leash on the scoring, commendably supported by Yadav and Sharma for the most part, meant England couldn’t score a boundary between overs 28 and 43.

Amy Jones, playing her 50th ODI, fell victim to the mounting pressure. Coming down the track, somewhat cramped for space, she swung half-heartedly, at a loopy Sharma delivery only for substitute Radha Yadav, fielding for Kaur, to gobble it up at short midwicket.

Kaur took at least two trips off the field, limping in the second of those instances, and was kept company by the physio in the Indian dugout for some time. She returned 1 for 24 in her three overs.

Raj, meanwhile, reintroduced Pandey for her third spell. But Sciver remained largely unaffected by the stemming of the run-flow or the fall of wickets around her.

Hammering five fours as she inched close to a potential second fifty in the ODI series, she received a lifeline on 47 as Pandey dropped a tough return catch. Sciver could, however, only add another two more to her tally as Smriti Mandhana snagged a stunning diving catch on the cow corner boundary to give Sharma her second wicket.

Sophia Dunkley kept the scoreboard ticking with her laps and scoops, however, Yadav’s googly had her partner Katherine Brunt stumped in the 41st over. Dunkley, coming off unbeaten scores of 74 and 73 in her last two innings, added 14 and 15 with Brunt and No. 9 Sophie Ecclestone before Goswami had Ecclestone pinged on her front pad. England reviewed, and with the ball appearing to just kiss the leg stump, the umpire’s call was upheld.

Dunkley’s 35-ball 28 ended with her leg stump knocked back by Sharma in the 45th over. Then, some sharp work off a straight drive from Sarah Glenn in the same over saw Sharma run Anya Shrubsole out at the non-striker’s end.

England’s 200 came up via a leg bye off Goswami’s ninth and final over, as Cross and Glenn made an attempt to inject some final-overs impetus. Their stand of 22 from 13 balls was a success to that end, with Cross hitting 4, 6, 2, 1 off Sharma’s 10th, and the innings’ last, over to set India a target of 220. An England win would complete their clean sweep for in the ODI leg of the multi-format, seven-match series.