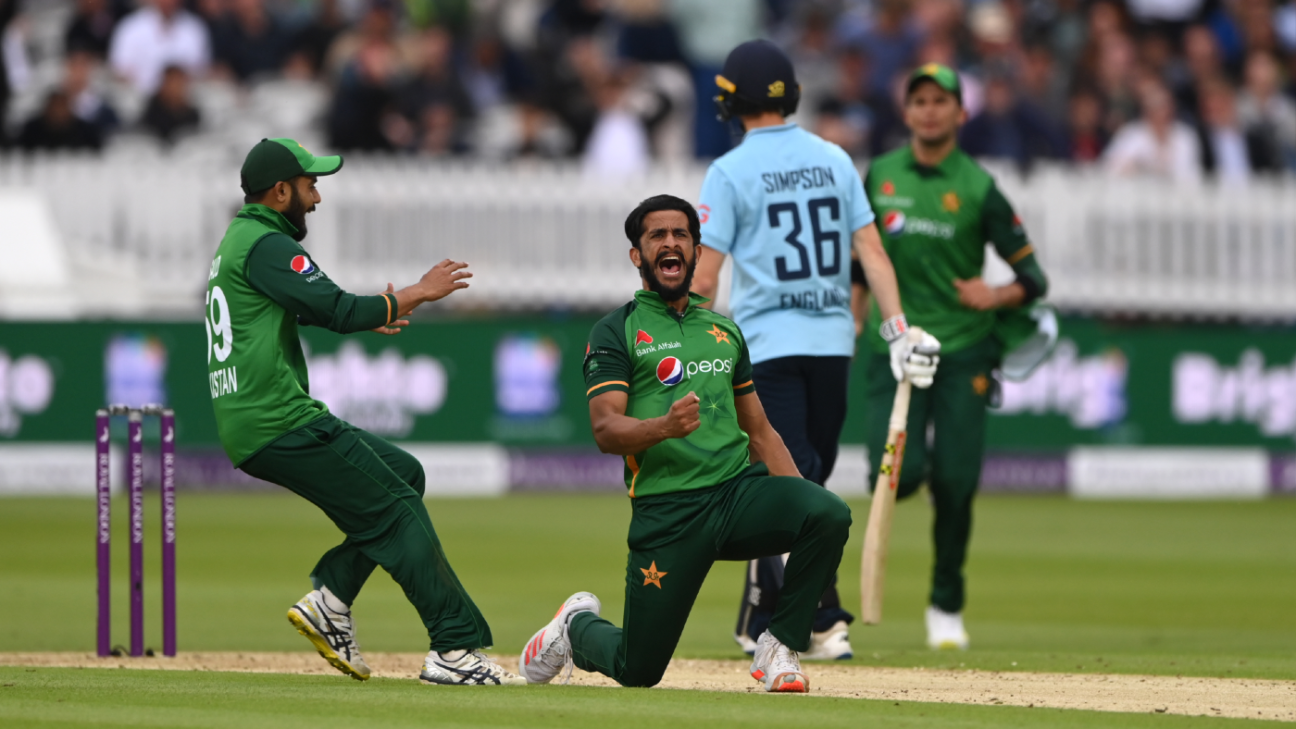 Pakistan’s top order batting is supposed to be their strength in white-ball cricket but over the course of the last two ODIs it has become the cause of a chastening series loss. In Cardiff on Thursday they were reduced to 26 for 4 even as the game had barely begun; at Lord’s on Saturday they stumbled to 36 for 3 and then 53 for 4. Not many games are going to be won from those positions.

A couple of mitigating factors might be charitably thrown in. Neither of the surfaces have been the surfaces we have become used to in an England ODI, where 320 is merely par. And Saqib Mahmood’s opening bursts have been of game-breaking quality in both games. But against what was, to all intents and purposes, the actual shadow England attack, expectations of a top order containing Babar Azam, Mohammad Rizwan and an in-form Fakhar Zaman should not be capitulating as they did. Not two games in a row.
Pakistan’s bowling may have been wasteful but it wasn’t the bowling that lost it, as Hasan Ali pointed out. “Faheem [Ashraf] and Haris [Rauf] bowled a little short and maybe outside of the stumps too,” he said. “In every match, a few players perform and we couldn’t do it today. But in ODIs 300 is a par score and we restricted them to 250, we got back into the game. But unfortunately we collapsed and we couldn’t get partnerships going. As a bowling unit, okay we gave away a few runs, but we still kept them to 250 so as a bowling unit I think we did well.

“We have coaches here, they know what mistakes they are making. But don’t forget, the same batsmen have done a lot for Pakistan recently. We’ve played well in a couple of series before this. Our top order scored runs in South Africa before this, Fakhar, Babar, Rizwan all scored runs there. Here unfortunately they just couldn’t and that is where we lost both matches.”

Every surface is different, but Pakistan can hardly blame unfamiliarity for the collapses. Although they came here straight from the UAE, where they were playing on slower, lower surfaces during the PSL, this is also the sixth summer in a row they’ve come to England, and on all but one of those, they’ve played white-ball cricket.

“Yes, it’s been six years that we’ve been coming but we play most of our cricket in Asia, and in the UAE with the PSL recently,” Ali said. “Conditions do make a difference and the ball seams here. That has caused us difficulty as a batting unit.”

Ali’s own day stood in stark contrast to that of his team. He picked up a first ODI five-for in over four years, a true return to form in the format in which he established his reputation in his first two years of international cricket. It was also his fifth five-wicket haul in international cricket this year alone, continuing a spectacular return that began in the last Quaid-e-Azam trophy.

His middle-overs burst of three wickets reduced England to 160 for 7 and after picking up the third of those – his fourth overall for the day – he had four overs left. In the event he only bowled one more before being replaced.

“I did speak to Babar because I had bowled three overs [in that spell] and then we decided to change bowlers,” he said. “Faheem had overs left, so did Haris. This is what we discussed that we would get through some of those overs unused but the ball stopped seaming then.”

He brought a late flurry with the bat as well, a 17-ball 31 with three sixes in a row off Matt Parkinson, though by that stage of the innings, his efforts didn’t carry a serious threat. They did carry regret though.

Osman Samiuddin is a senior editor at ESPNcricinfo