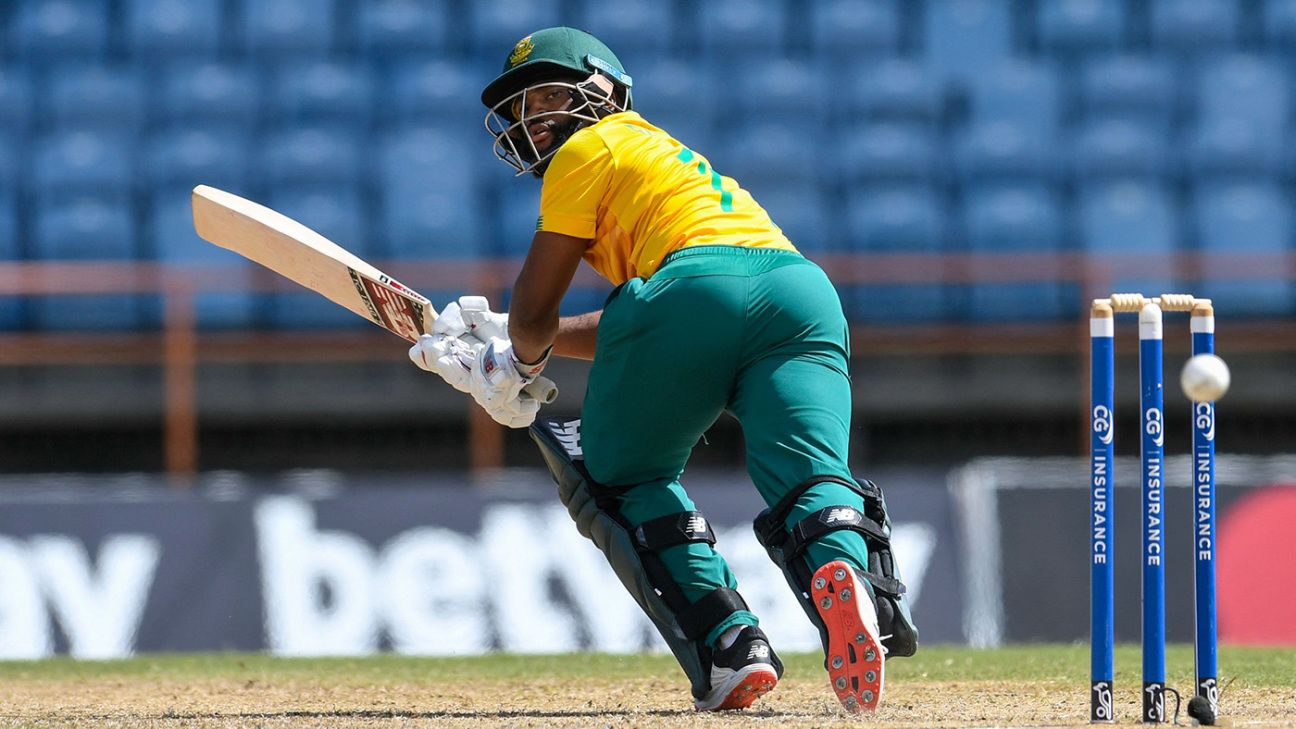 “You could say it’s David and Goliath, but David beat Goliath and hopefully that can work for us.”

Andy Balbirnie has probably rehearsed that line hundreds of times and knows he will need to bring it out hundreds more but showed no sign of being worn down by the inevitable question of whether the match-up between Ireland and South Africa is a foregone conclusion. One of the intentions of the World Cup Super League is that there aren’t supposed to be any dead-rubbers because teams are always playing for points. And in South Africa’s case, they need plenty.

South Africa lie in last place on the league table but, along with Zimbabwe, have played the fewest number of games. That is set to change over the next few months. After these Ireland matches, South Africa are due to make up postponed fixtures against Sri Lanka later in the year and hope to have both India and England in the calendar, after matches have been pushed back. For them, Ireland is a chance to start climbing the points’ ladder and setting on combinations under a relatively new captain in Temba Bavuma.

Since taking over as white-ball captain in March, Bavuma has only led in one ODI series, against Pakistan, which came almost a year after South Africa last played the format, against Australia in March 2020. South Africa swept that series 3-0 and until their recent tour of the Caribbean, it was the format where they had enjoyed the most success under Mark Boucher and arguably, the format on which they are placing the most importance. Boucher and Bavuma have both been appointed until the 2023 World Cup.

Ireland also put a lot of emphasis on the fifty-over game but did themselves no favours when they were beaten by Netherlands. They know they have much more in the tank though, and began their World Cup Super League campaign by taking points off England. They will have to summon that spirit to avoid falling into the stereotype of being the weaker team against South Africa. At least, they will have a small home crowd to cheer them on. Cricket Ireland have approved a limited number of fans – 560 – to be in attendance in Malahide.

South Africa run into former countrymen against several countries but this will be their first meeting with Curtis Campher, who is also among their most recent leavers. Campher played for the South African under-19 team as recently as 2018 and made his debut for Ireland two years later. In eight ODIs, he has scored three half-centuries, batting at No.7, bowled a full quota of 10 overs twice and is playing the role of a lower-order allrounder that South Africa currently lacks. But there’s unlikely to be any time or inclinations for what could have been from Campher’s side. He will be concentrating on making the best comeback he can, after undergoing ankle surgery in May and missing the series against Netherlands as a result.
Temba Bavuma made his ODI debut against Ireland five years ago and scored a century to defy perceptions that he was a long-format specialist. He had to wait almost a year to play a second match and then two-and-half more years before getting a regular in the team and has since had two scores in the 90s in seven innings, as well as been named permanent captain. Bavuma has yet to make a definitive score as skipper after a middling tour of the Caribbean and may see an opportunity to do so in this Ireland series.

Ireland was set to bring back William Porterfield at the top of the order for his experience, but the veteran opener has injured a finger on match eve. That prompted the selectors to bring Jeremy Lawlor into the squad, and he could slot straight into the XI too, to open with Paul Stirling. Conditions may demand an extra seamer but offspinning allrounders Simi Singh and Andy McBrine have been successful throughout the year bowling in the middle overs, meaning Mark Adair may start the series on the bench. Campher is expected to replace George Dockrell as the batting allrounder in the middle order.

The XI that last won an ODI for South Africa are all in the squad and if they play, that will mean a first appearance for Andile Phehlukwayo on this tour. He did not feature in the T20Is in the Caribbean as South Africa dispensed with the seam-bowling allrounder in favour of a spin-bowling one, but are likely to return to more pace-friendly conditions. South Africa may also want to start strongly by returning to their first-choice pack back in action after Anrich Nortje missed the final T20I in Grenada as a precaution after being hit on the knee.

South Africa are expecting run-scoring to be more free-flowing than it was in the Caribbean, although they will be wary of the moving ball in the early stages of their innings. There is some grass on the surface which should aid seam movement, but if the top-order batters can negotiate that and get in, there’s every chance of a score in excess of 300 on a ground with small boundaries. That’s if they get much opportunity to bat at all. There’s a more than 70% chance of rain expected throughout the day on Sunday.

“The ODIs are hugely important, more so maybe than the T20Is because of what the points carry, as opposed to the T20Is. But all games you play for Ireland are important but certainly a lot of our focus for the last two or three weeks – albeit we’ve had those festivals – has been on one-day cricket and how we can get the best out of these three games and the three following. The T20s are a good chance to express ourselves and go out all guns blazing against them, and try to produce results.”

Ireland are placing more emphasis on the ODIs than the T20s, given the pathway to the 2023 World Cup, according to captain Andrew Balbirnie.

“There are similarities. The style, the philosophy and the thinking is generally quite the same. We would like to continue that same type language and feel throughout both formats. We are quite fortunate that we have a majority of guys that play fifty-over as well as T20 so when you talk about a culture, it becomes easier to allow that to flow. It allows us to speak the same type of language through the different formats.”

Temba Bavuma hopes for continuity in the white-ball formats for South Africa.